The year is 1967. Gil-Scott Heron is on the hi-fi, the Vietnam war rages on TV screens, and New Jersey is burning. A Black cab driver is beaten by two white cops in Newark, which sparks protests, violence, looting and, eventually, the deaths of 26 people; the four-day uprising will forever be known as the Newark Riots, one more incident on the nation’s still-in-progress timeline of racial strife. And across town, in a club where a lounge-lizard band plays covers of old standards and cracks vaudeville-era jokes, Giovanni “Johnny Boy” Soprano, his brother Corrado (a.k.a. “Junior”), “Gentleman” Dickie Moltisanti, and the rest of their crew celebrate their hold on the region’s criminal enterprises. Never mind the crowds of angry citizens demanding justice and throwing firebombs a few miles away. In this city, at this moment — and as far as you’re concerned — the Mob, not the mob, still rules.

Yes, that Mob; yes, those Sopranos. A long-promised prequel to the HBO show that permanently changed a medium (two mediums, if you count the ripple effect the television revolution had on the movies), The Many Saints of Newark finds creator David Chase purposefully rewinding to a pivotal moment that brought the Garden State to a boiling point. Any resemblance to what happened then and what’s happened in recent years is, of course, no longer coincidental at all. But along with co-writer Lawrence Konner and director Alan Taylor, he’s also constructing a back-in-the-day fable, as viewed through the eyes of the kid who’d eventually run the family business. “Lately, I’m getting the feeling that I came in at the end,” Tony Soprano once said. “The best is over.” This is the “best” he’s talking about — the golden age of gangsterism, the Rat Pack version of this thing of theirs. It turns out the previous generation also had to deal with lying, cheating, in-house squabbles, goomah problems, jealousy, murder, gang wars, questionable parenting, poorly baked ziti, suspicious fires, and more murder. Plus ça change.

Chase has brought us here before, briefly: You may remember “Down Neck,” an episode near the end of The Sopranos‘ first season that found Tony sifting through traumatic memories of seeing his father arrested at the Rideland amusement park. (That flashback is reprised, recreated, and remixed here, with the Newark cast.) It’s a key loss-of-innocence moment for young Anthony, all wide eyes and open ears; when we fast-forward to him as a teen around the film’s halfway point, he’s about to get thoroughly schooled in the cruel ways of the world. Except the movie isn’t really about Tony, or at least not just about him. The guy we’re riding shotgun with the most, sometimes with a literal shotgun in tow, is Dickie Moltisanti (Alessandro Nivola). Son of “Hollywood Dick” Moltisanti (Ray Liotta). Father of future killer/lover of Kundun Christopher Moltisanti. The right-hand man to Johnny Boy (Jon Bernthal), the primary father figure to Tony, and the liaison between the Soprano family and the numbers racket that keeps African American money lining Italian American mobsters’ silk pockets.

Except the riots, and the legacy of social inequity, are about to disrupt Dickie’s operation. One of his main runners, a man named Harold McBrayer (Leslie Odom Jr.), is starting to question the arrangement he has with Dickie. He isn’t afraid to get his hands dirty, but he’s beginning to bristle under the Mob’s thumb. And when Harold starts seeing bodies and rolling tanks in the streets, he takes the first step toward a radicalization that will eventually lead him to think: Maybe the Sopranos shouldn’t be the only game in town. There’s also the matter of Giuseppina (Michela De Rossi), Dickie’s new Italian stepmother and a sort of imported trophy wife for the older, repugnant Moltisanti. A stranger in to the ways of America, she’s impossibly young, drop-dead gorgeous, and incredibly ambitious. The sexual tension between Dickie and Giuseppina is off the charts. She seems to have caught Harold’s eye as well.

This is the story that Chase is telling, a character-driven epic that blends regional history and national tragedy, crime and punishment, sex and violence, and dark comedy and very well-tailored suits. (He’d planned on directing it himself, in fact, until a family illness forced him to step back; but with nine Sopranos episodes to his name, Alan Taylor knows his bada from bing all too well.) Chase wanted to make a gangster movie, and given that anything even remotely Mafia-related would be compared to his six-season masterpiece, he might as well set it in the Sopranoverse, right? It’s not a “just when I thought I was out…” scenario, even though the powers that be had apparently been trying to get him to return to these stomping grounds for years. Chase chose to thread this tale of made men into the world he constructed over 86 episodes. 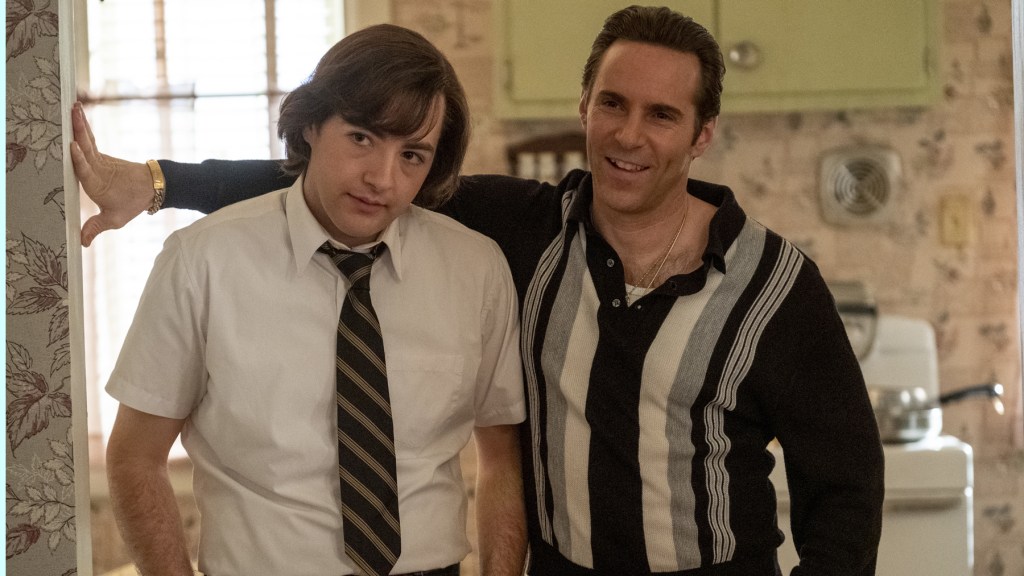 And here’s where things get complicated, because there are really two films happening inside The Many Saints of Newark: a rise-and-fall crime movie that touches on 1960s America (and 21st-century America), race, masculinity, blood ties, and the ways we either divide ourselves or are divided by forces a lot larger than us; and, per the movie’s subtitle, “a Sopranos story.” Duality was always a constant in the series — dedicated father versus cold-blooded psychopath, family man vs. “family” man — as was compartmentalization. (See: Soprano, Carmela.) But there are enough moments when you can feel the stories sucking the life out of each other, and where you wonder if one or both of these narrative parts might be better served if they were served separate. It’s hard not to occasionally feel that a lot of meat was left on the table in regard to revisiting now-accepted immigrant communities and suppressed, struggling communities fighting over criminal empires. Just as steam starts to build between Nivola and Odom Jr. — and both actors are truly bringing their A-game here — we keep going back to the old gang, seen in their younger days, joshing each other and dropping references to future plot points. Commentary about bigger concerns gets short shrift next to I.P. nostalgia. Look, there’s thirtysomething Livia, sneering “Poor you!” just like she used to! Check out Big Pussy, when he was still just Small Pussy!

If you’re a diehard Sopranos fan [raises hand], it’s a blast to revisit these characters, to share in the in-jokes, to clock the breadcrumbs and footnotes. It’s still a world where if someone says the wrong thing, insults the wrong person, laughs at the wrong moment, they may catch a beating or a bullet. You can forgive the Muppet Babies-like quality of fan favorites being embodied by younger actors, even if mileage may vary on the reliance of old tics and wink-wink caricatures. Who wouldn’t want to see Satriale’s Pork Store one more time, or revisit Holsten’s ice cream parlor, where we last left Tony (and where Tony most assuredly left us). Not all of it works — Saints is bookended by beyond-the-grave voiceovers from an extremely well-known Sopranos MVP, which is … a choice. It’s one thing to have baby Christopher cry when Anthony holds him, and another thing to have people around him say, “It’s like he senses something about you; babies bring over extra knowledge from the other side,” yadda yadda yadda. Your ribs get bruised from all the nudging.

Yet when the familiarity of these characters and this world syncs up with the other, deeper things that Chase & Co. explored in the series and continue to mine here, notably in the movie’s superior second half, The Many Saints of Newark gives you that feeling that you got when you watched the show’s genuinely great episodes. Once we fast-forward to 1971, right at the moment that Johnny Boy gets out of a four-year stay in prison, we get teen-angst Tony and an entirely different connection to the original. As has been noted everywhere, this version of Anthony is played by Michael Gandolfini, as in James Gandolfini’s son, and what sounded like stunt casting on paper becomes something else entirely onscreen. There’s no sense that he’s “doing” the Tony we knew from the show via his father’s iconic interpretation, or performing some sort of paternal-acting-karaoke. He’s merely playing the character as a confused youngster finding his way, attaching himself to Dickie in a desperate attempt at stability in a household ruled by emotional manipulation and chaos. And yet, to paraphrase a wise old Greek dude, he gives us the boy at 17 and shows us the man. The fact that his last name is Gandolfini stops mattering after five minutes of screen time. This role is his.

His scenes with Nivola and Vera Farmiga, who gives us the younger, hungrier, hostile Livia we deserve, are ultimately what give Many Saints its real sense of dramatic conflict and human connection. The fact that Farmiga’s terror of a mother doesn’t bring to mind Nancy Marchand’s scheming ma so much as a dead ringer for Edie Falco’s Carmela only ups the Freudian ante. (A sequence with a school counselor and Livia emphasizes just how fucked up the boundaries in that household were.) And when Nivola starts to pull away because he knows that he’s no role model for this kid, and we know that not even his rejection can stop the trajectory of Tony into the gangster-as-tragic-existential-hero, things begin to take a turn toward the Shakespearean. It’s worth wallowing through some of the weaker spots and unsteady tonal shifts of the movie’s first few acts to get to this devastating last one. Chase has delivered something that walks the tightrope between social melodrama and fan service, and that sometimes teeters on the edge of falling. But he has also given us the foundation for the moment when a man from New Jersey will wake up one morning and get himself a gun.