Tyler, the Creator Showcases His Eras at Lollapalooza 2021


It’s been a long 16 months without in-person concerts and festivals, and as Lollapalooza returned for Day Two at Chicago’s Grant Park on Friday, attendees and artists alike were all still feeling their way into the new normal. While official attendance numbers were not made available, the grounds did not appear to be at its typical 100,000-person capacity. Though it was busy and packed tighter near stages (and it got more crowded as the day wore on), there was still a decent amount of space away from the front of stages to socially distance and maneuver around the park, a welcome respite while in the midst of a pandemic where Covid-19 case numbers are once again rising.

Masks were required on the honor system for those who were unvaccinated (and could be obtained for free at the fest), though very few people were seen wearing them on a day that coincided with Chicago health officials recommending universal masking indoors following the uptick in Covid-19 cases nationwide. On Friday night, the festival tweeted that beginning Saturday, masks would be required in indoor spaces on the grounds.

While fans were reacquainting themselves with how to navigate crowds, the year-plus spent away from the stage gave artists plenty of time to reflect. Earlier in the day, Grandson encouraged fans to be kind to those around them. “You have no idea what that person has been through,” he said, and Giveon reveled at the opportunity for his first-ever festival performance. By nightfall, Tyler, the Creator contemplated how far he had come.

“I was gross,” the rapper said thinking back on his come-up. “I was nasty as fuck” and “ugly” he recalled.  But, he surmised, a decade after his debut studio album, Goblin, dropped, he was “super proud” of where he’s arrived. “Massa” addressed his transformation with his grooving flow building grittier as the song progressed.

Tyler has had a fascinating and stunning metamorphosis, from an irascible figure whose early depraved lyrics and antics were polarizing, to the sophisticated and charismatic artist who commanded the stage with ease as he danced, affably shared stories and set different tones for the eras of his career, via lighting, background and clothing changes. 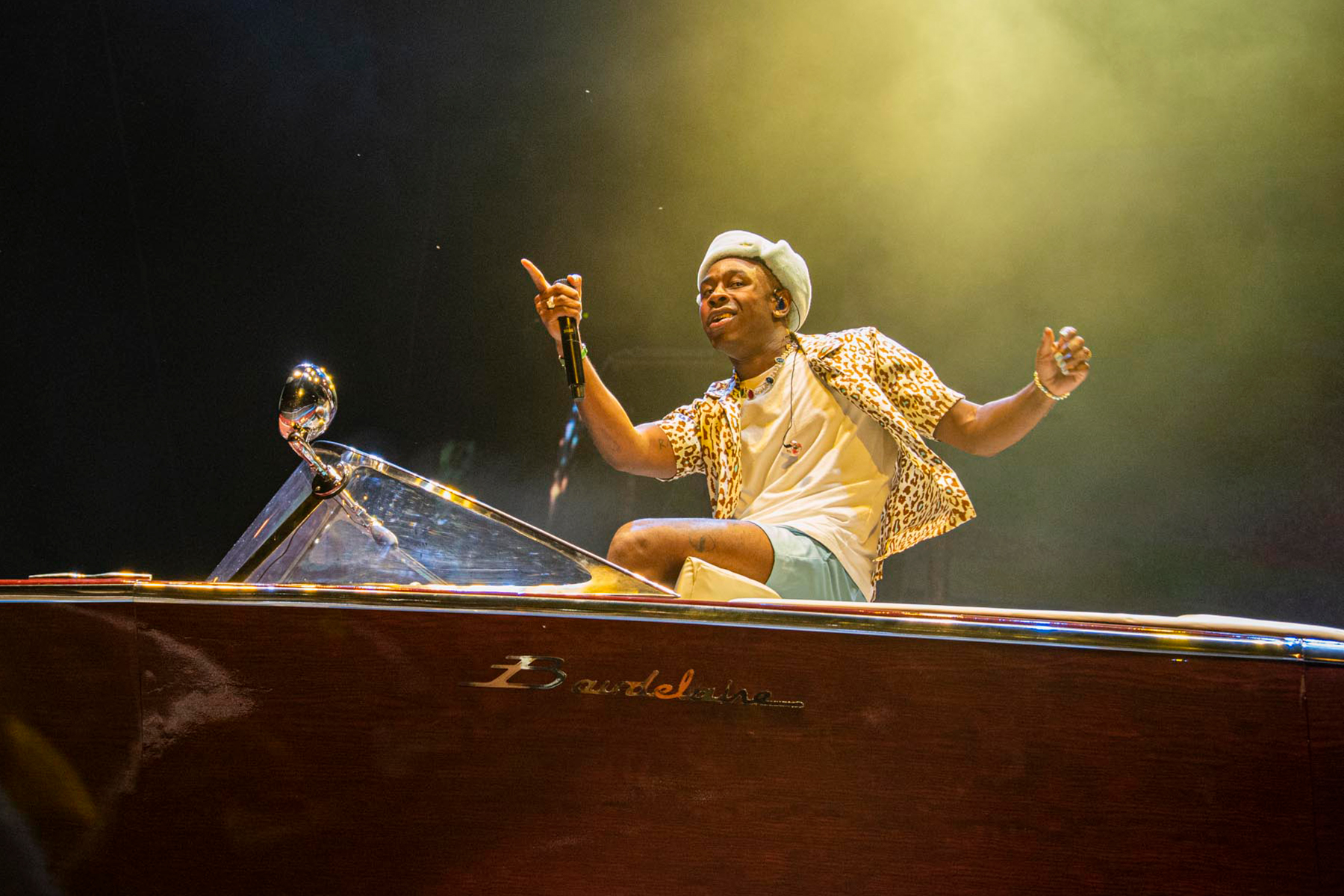 Tyler the Creator performs at Lollapalooza in Chicago on July 30th, 2021.

His previous turn at Lollapalooza in 2018 found him admonishing the crowd for not forming a proper mosh pit, but even then his more thoughtful side had already emerged with the release of Flower Boy the year prior. This time around, he served as headliner and his ascent was well-deserved. Having released two accomplished albums since (2019’s Igor and Call Me If You Get Lost, which arrived in June), that material, coupled with songs from Flower Boy, showcased a progression from his early solo albums and Odd Future days with more personal, heartfelt lyrics, while incorporating the best of his techniques and style he’s honed through the years.

This year, he showed up onstage as a bellhop while pushing a full baggage cart. He lightheartedly searched through the luggage to change out of his uniform into something more leisurely before launching into “Corso.” Along with his top-billing came bigger production, which included a prop boat that rocked along with his more foreboding fare.

His penchant for juxtaposing vulnerability, such as on Call Me songs “Wasyaname” and “Sweet,” against going hard AF, were on display, between songs and also within them, such as during “New Magic Wand.” For the latter, he donned the blonde bowl-cut wig and suit from his Igor era and also delivered “I Think” and “Earfquake” from that LP later in the set.

But before digging into material from his recent past, he dedicated his first run of songs to his latest acclaimed LP. “Uh OK, I guess you like that shit,” he commented, feeding off the crowd’s hands-in-the-air approval, before saying that he had some other songs to deliver. “I’m gonna run through them now.” Flower Boy fans were treated to a tender “See You Again,” “911” and “Boredom” — while written before Covid, they resonated in the longing and loneliness that befit the times, as well as the frenetic “Who Dat Boy.”

He explained that Flower Boy was after his “ugly phase,” but for his old-school fans, he also dropped a “select few” early bars, including Goblin‘s “She,” “Tron Cat,” “Yonkers,” and Wolf‘s “IFHY,” “Bimmer” and “Tamale.”

He capped off the night with the one-two punch of “I Thought You Wanted to Dance” and “Runitup,” a song tailor-made for an uplifting field-wide sing-along.

“We ain’t nothing to you, but we something to them,” he rapped on the confident closer. “When you in your room and you starin’ at the ceiling/Dreaming, I want you to know there’s no ceilings/I want you to notice that feeling/I want you to go for it/I want you to reach with no fearing.”

If you told early vehement detractors who witnessed early chaotic, petulant Odd Future shows that within a decade they may become fans, it’s likely they would’ve balked. But Tyler reminded critics that there can be redemption following youthful ignorance, something for which most of us are not exempt. Deciding to own it and coming out a better artist is a revelation.

Lil Nas X and Elton John have teamed up for “One of Me.” It’s the pair’s first...

Kanye West floats above the clouds and encounters his late mother, the namesake of his...

Dave Grohl has shared a new trailer for his upcoming memoir, The Storyteller. The book...