No shortage of miracles came into play to make the Pyer Moss Haute Couture 1 show a reality. Not least, after Storm Elsa pushed the event out by 48 hours and demanded the entire production, logistics and all, be dismantled and re-arranged. But, after all, Couture really is about near-miraculous, unfathomable fashion. And for the members of the public who obtained access to the historic show at Villa Lewaro in Irvington, New York on Saturday, it was as close to witnessing magic as mere mortals can ask for.

The wizard behind the curtain on the day was Kerby Jean-Raymond, who has cemented himself as one of the most important American designers of his era. Beyond his influential approach to creating clothes that customers are clamoring for, he has garnered industry and cultural acclaim due to the level of thought and attention to detail that permeates every single thing he does; all of which puts elements of the Black experience front and center.

Jean-Raymond is the first Black American designer to be officially invited to show Haute Couture by the Parisian body, Fédération de la Haute Couture et de la Mode. (In another miraculous move, the organization officially extended the schedule so that the Pyer Moss show could close the Fall Winter season, after Thursday’s rain forced things to be rescheduled.)

The designer took this premiere opportunity to create a fantastical, theatrical narrative, re-imagining objects and inventions created by Black individuals and taking them out for a high fashion (and rather camp-like!) spin. While the creations were unforgettable in their own right, it was the setting and the production that ensured this moment would go down as a memorable point in fashion history. The regal mansion in the backdrop was the former home of Madam C.J. Walker, a Black woman entrepreneur who became the first self-made female millionaire in America. Indeed, buses ferrying guests out to the greenery of the suburbs picked them up from prominent Black women-owned businesses in New York City and Brooklyn too. The show was well and truly kicked off by a rousing speech from Elaine Brown, the only woman leader of the Black Panthers, who asked, “Where do we go from here?” As if the cheering crowd wasn’t already eagerly shifting in their seats for what was to come, an orchestra-accompanied, choreographed performance led by 22Gz, Jean-Raymond’s fellow East Flatbush resident, signaled that ‘The King of New York’ was incoming. 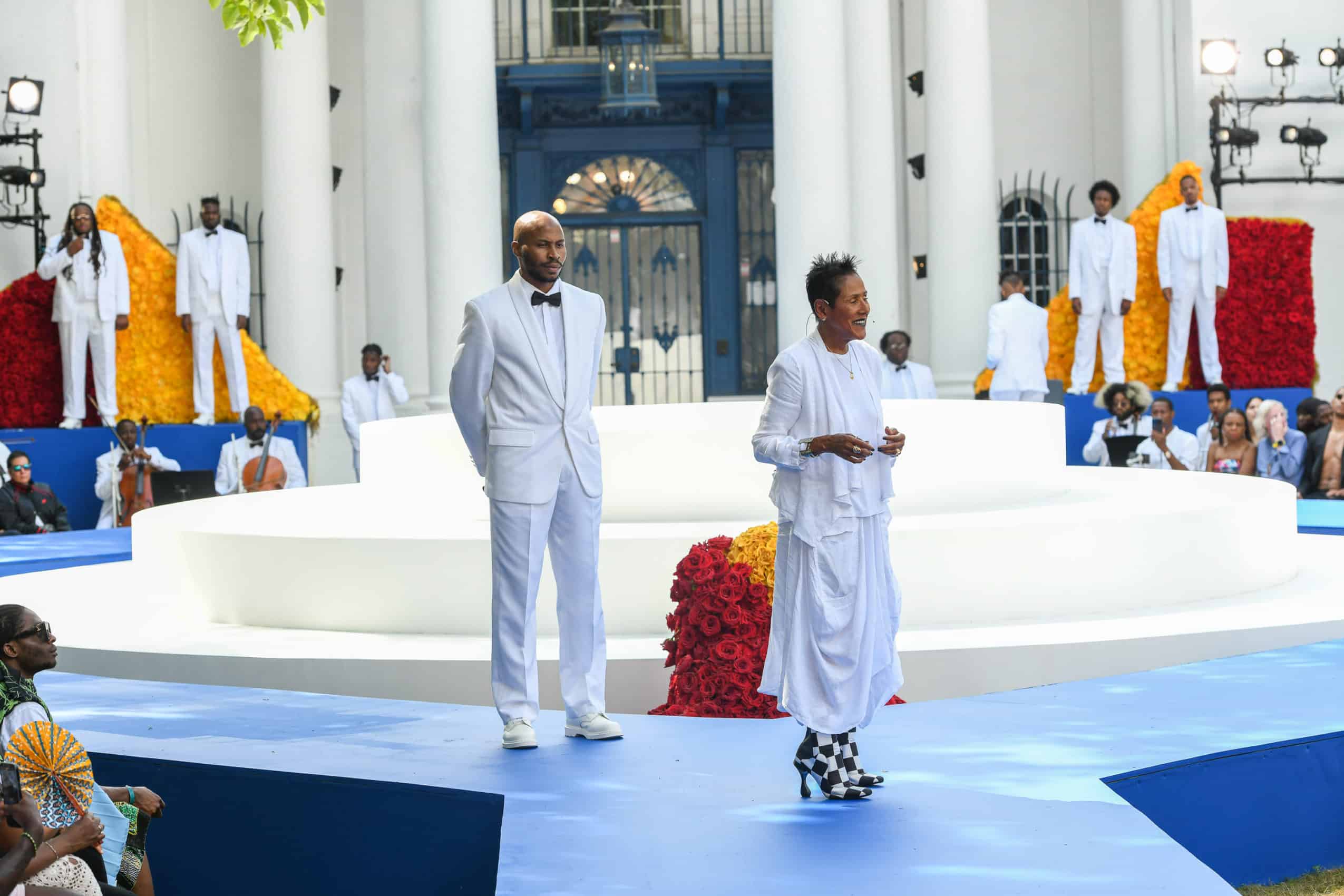 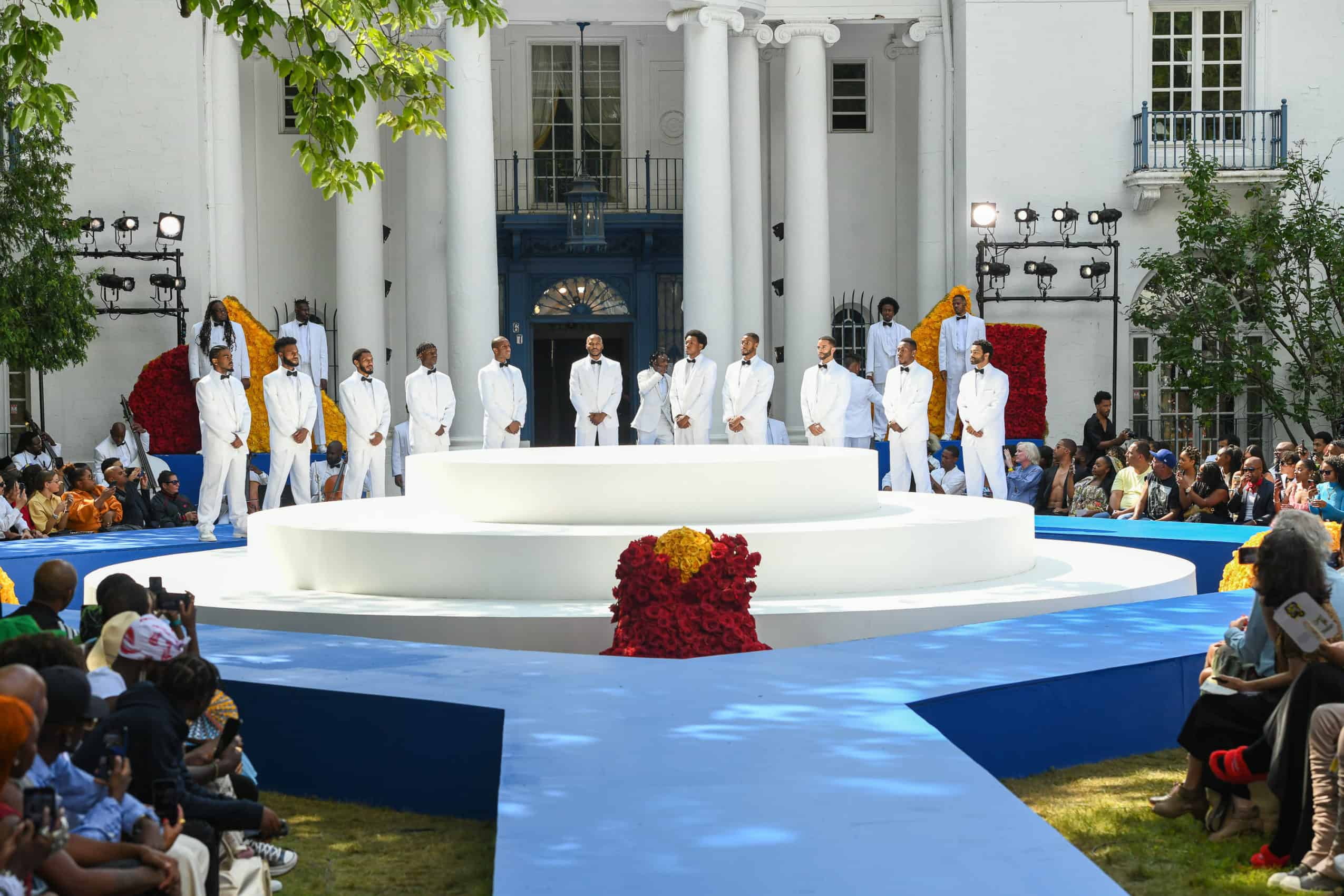 Couture is, notably, aimed at real life monarchy or those with bank accounts big enough to warrant them to live like royalty. Couture also tends to place fantasy on a pedestal, with fashion that feels fit for another realm. But this was an altogether different approach. Rooted in reality and literal references, it cast the everyday and mundane through another lens, turning the most banal into the most beautiful (the glittering pale pink lamp shade seemed to be a particular crowd pleaser.) Inspired by a list of inventions Jean-Raymond had seen at the Library of Congress, the jumping off points were clear to see —from a chess set to a cloak of hair-wrapped velcro rollers—but the final outfit, a take on the refrigerator, starkly asked: “But who invented Black trauma?” Taking to his Instagram Stories post-show, celebrity stylist Law Roach stated that this was an offering dedicated proudly to the Black community, saying, if you didn’t get it, it wasn’t for you.

After every Haute Couture week, there’s debate about what its true purpose is. One such school of thought is that it serves as an overall marketing and advertising scheme—allowing a designer to create an overarching vision of what their brand means from entry purchase to the most elevated offering. After the designer took to the runway flanked by his entire behind-the-scenes team for an emotional and triumphant post-show bow, the crowd excitedly gathered at the back of the villa for a cookout and cocktails. But several steadfast fans lingered behind, to sit in the front row and have their photo snapped in their new Pyer Moss sneakers while gripping Pyer Moss-branded water bottles. Keen to revel in the magic for a few minutes longer. And that’s exactly who this million-dollar production and awe-inspiring offering was for.

See the collection below: