Unless you’ve been living without cell service for the last 16 hours, you’ll have heard the word: the long rumored Sex and the City reboot is finally confirmed! Sarah Jessica Parker, series protagonist and producer, made the announcement on Instagram on Sunday evening and has been engaging in the conversation with fans—including a response to a commentor who said they’ll miss seeing Kim Cattrall as Samantha Jones in the upcoming revival.

SJP graciously replied saying that the cast and crew would miss her too. (For those needing a TL;DR update: Cattrall has repeatedly said she will not appear in any future Sex and the City projects due to her distaste for Parker. Parker, on the other hand, has repeatedly dismissed any beef.) 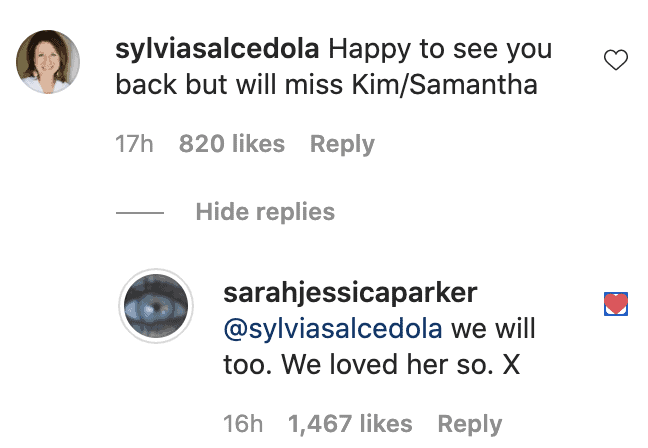 Production on the upcoming installment will commence in late spring. The 10-episode revisit will follow Carrie Bradshaw, Charlotte York,  and Miranda Hobbes as they navigate love and friendship in their 50s—and said actresses will also executive produce alongside Michael Patrick King.

On Instagram, Candace Bushnell, who penned the original columns that spawned the series also shared her excitement. Bushnell has recently written a book, titled Is There Still Sex In The City?, which may have some influence on the plot.

Meanwhile, author and New York Times celebrity profile writer Taffy Brodesser-Akner took to Twitter to ask followers for their thoughts on what the plot will contain. Parker even took part herself, joking: “pens and paper at the ready.”

Exceeding all expectations. I am summoning discipline though desperate to suggest “hot/cold”

Many fans also had interesting ideas for how to explain Samantha Jones’ absence—and if nothing else, their suggestions gave us a much-needed laugh.

How do you think the showrunners will explain things in the storyline? Answers on a postcard!

She decides to return to Abu Dhabi to do PR for the hotel she was expelled from. Charlotte will boast she just got a letter (!!) from her & wince that Sam finally convinced the sheikh to have sex in public & Carrie will lob a “sheikh your groove thing” pun. I hate them all.

she was a mannequin all along pic.twitter.com/34BMwjlykF

After a dispiriting turn as comms director for a rising tech bro, she agrees to go on a cruise with a hot guy she met at the gym, but he turns out to be a MAGA guy and it’s a right wing conspiracy cruise that has to stay out at sea indefinitely because of a rotovirus outbreak

the writers might be spiteful and kill Samantha off, but i think it would be nice for the fans (me) if she had her happy ending, with Smith in some chic LA polyamorous set up. i loved their relationship✨ pic.twitter.com/zD6tpptyIa

She was hired as the publicist for Fyre Festival and is still hiding out after the hit her career took pic.twitter.com/CucmniQZep

She slept with Big