Putting on The Ritz! The Ultimate Guide To San Francisco –


Brian Wolk and Claude Morais’ latest Wolk Morais Diary takes them on a weekend adventure to Nob Hill, San Francisco for a stay at The Ritz-Carlton San Francisco. What to do on a San Fran getaway? They’ve got you covered!

For more than a century Nob Hill has been the center of San Francisco’s most prominent and prodigious society. The word Nob’s derivation comes from the Hindi “Nabob” which refers to wealthy Europeans who made a large fortune in the east, but in the case of Nob Hill its original residents’ capital was acquired during the gold rush and via the railroad trade. The hill, or perhaps better referred to as a pedestal, still showcases San Francisco’s more cherished and architecturally significant neighborhood. The city on the hill today boasts an incredible mélange of multicultural offerings reflecting the city’s rich and diverse communities.

King of the Hill
Perched on the top of the hill is the crown jewel of the neighborhood, The-Ritz-Carlton San Francisco. Like a great Greek temple, this stately building has been the center of elevated cultural happenings since 1909. Designed by Napoleon LeBrun and Sons, the building was originally constructed to be the Pacific Coast headquarters of the Metropolitan Life Insurance Company. Entering through the impressive colonnade into the marble sheaved lobby would satisfy the most discerning aesthete’s neoclassical fantasies; but that’s just where the five star experiences begins. The Lounge, a handsome salon located off the main lobby of the hotel offers a tempting selection of delightful bites, handcrafted cocktails and daily tea service. There is nowhere more sophisticated to take in the views of the golden city than in this bastion of genteel civilization.

The Sweetest Suite
The Presidential Suite at the Ritz-Carlton is a study in unabashed luxury. With nearly two thousand feet of interior space the suite highlights include a dining room, a fully stocked pantry and wet bar, marble bathrooms, and la pièce de résistance, an incredible 1,200 square foot balcony with panoramic views of the city. These Elysian accommodations are not just fit for a president, but an emperor. With a backdrop this compelling we decided to invite our social media community to join us for a Wolk Morais Happy Hour. Check out our room tour for an insider’s look at the most sumptuous accommodation in San Francisco. 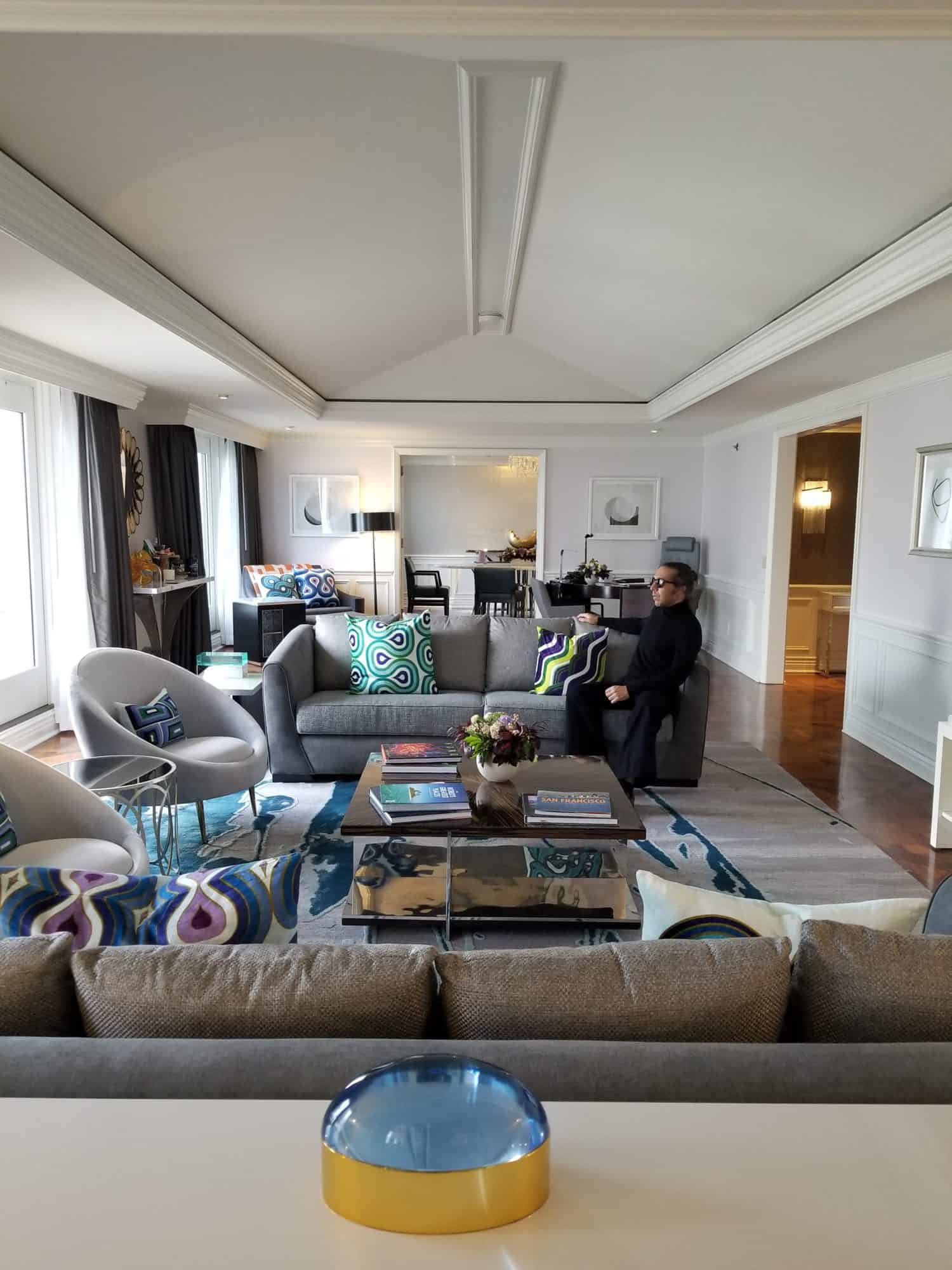 Sustainably Served
At the helm of culinary arts at The Ritz-Carlton San Francisco is Executive Chef Michael Rotondo. Making his way to San Francisco from the Windy City in 2013, the chef’s commitment to sustainability is showcased by the pristine fair trade seafood, organic produce and local wines that he features on the menu.  On any given day the chef will stroll through the diverse communities surrounding the property to forage inspiration for the eclectic offerings he eloquently interprets through the lenses of the hotel’s impressive dining venues. Understanding the guests’ desire for compelling culinary theatre, Chef Rotondo not only creates delectable meals but also creates experiential presentations for his guests through innovative tableside service. This heightened approach to cookery is perfectly suited for the digital generation’s inexhaustible appetite for seductive content.  With an eye on evolution and utilizing all architectural aspects of the hotel, the chef is focusing on making the property an urban resort that caters to the communities that inspire him. We look forward to what’s next on the menu for this visionary culinary leader.

Flights of Fancy – JCB Tasting lounge
If Christian Lacroix and Louis XIV collaborated on a luxury speakeasy, JCB Tasting Lounge would be the result. The Jewel box’s luxuriant interior reflects the decadent taste of JCB Creative Director and wine world enfant terrible Jean-Charles Boisset. Nestled in the former luggage room of The Ritz Carlton this exquisitely crafted salon de vin is an indulgent remedy for those seeking a cure from the humdrum of modern life. Flights of delectable wine are served in the finest crystal accompanied by delicious caviar in one of the most sensuous environments in San Francisco. A tasting at JCB is a Dionysian delight, don’t be surprised to see your fellow tastemakers back for more the following evening. 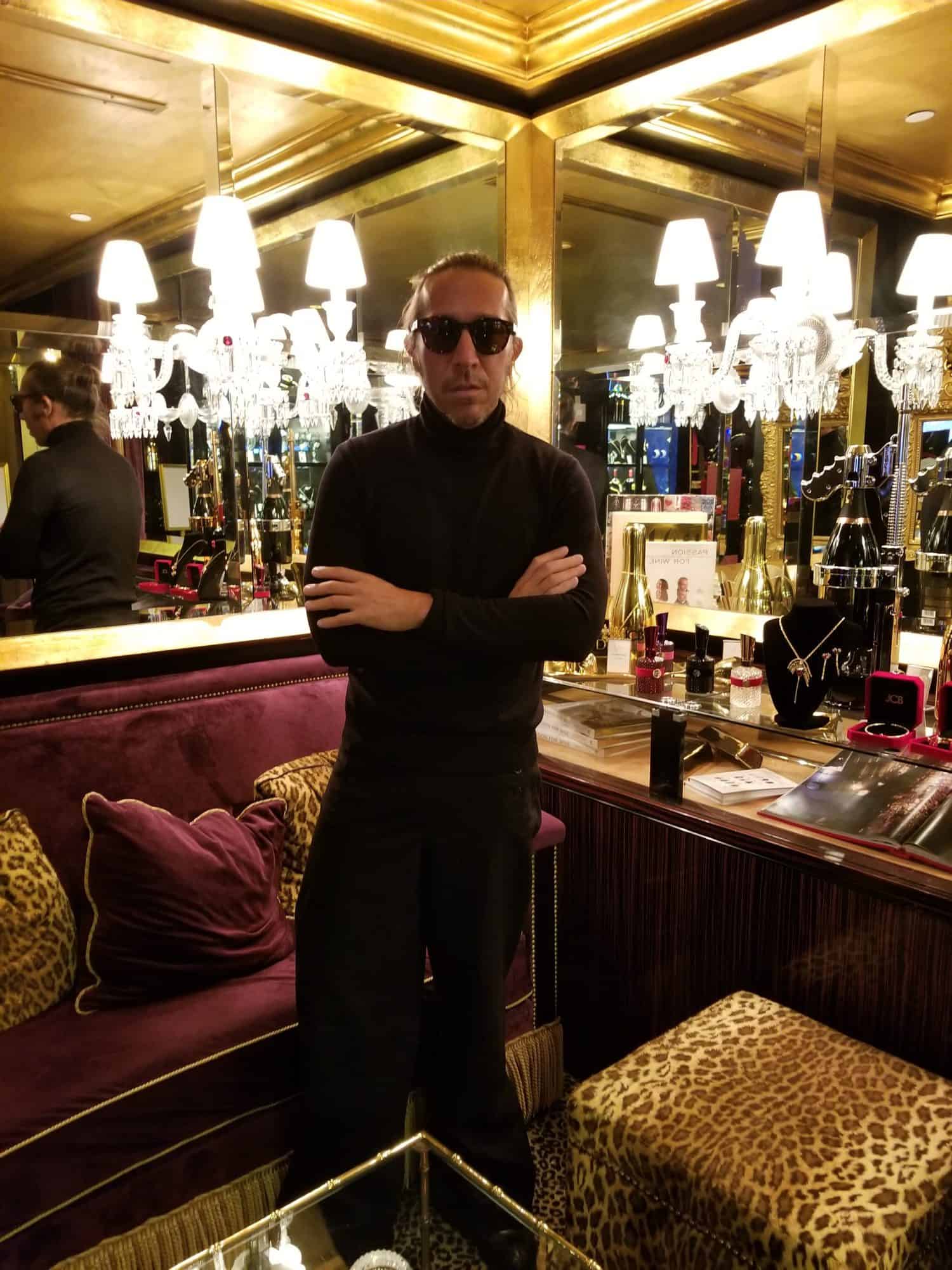 Proustian Perfumes – Kriegler
When in search of lost time, there is no better way to connect to the past than through an alluring olfactory journey at Krigler. Perfume maker to Hollywood royalty and titled aristocracy, Krigler has been making luxury fragrances for the rich, famous, and infamous since 1904. With a clientele that boasts Grace Kelly, Carry Grant, Jackie Kennedy, and Marcel Duchamp this century old parfumier’s rarified elixirs are only available at a handful of locations throughout the world.  The founder’s great grandson Ben, the fifth generation of Kriglers is now charged with keeping the family’s time honored tradition alive with inventive and relevant perfumes and colognes.

The Pious Promenade – Huntington Park
In the shadow of Grace Cathedral, San Francisco’s most impressive gothic Episcopalian church, resides Huntington Park. This meticulously manicured garden is not only a delight for the senses but a place for locals to show their designer wares whilst they walk their pampered pooches. The magnificent Fountain of Turtles takes center stage in the park. Originally part of William Crocker estate, the land and fountain were gifted to Grace Cathedral after the property was destroyed in great fire of 1906. 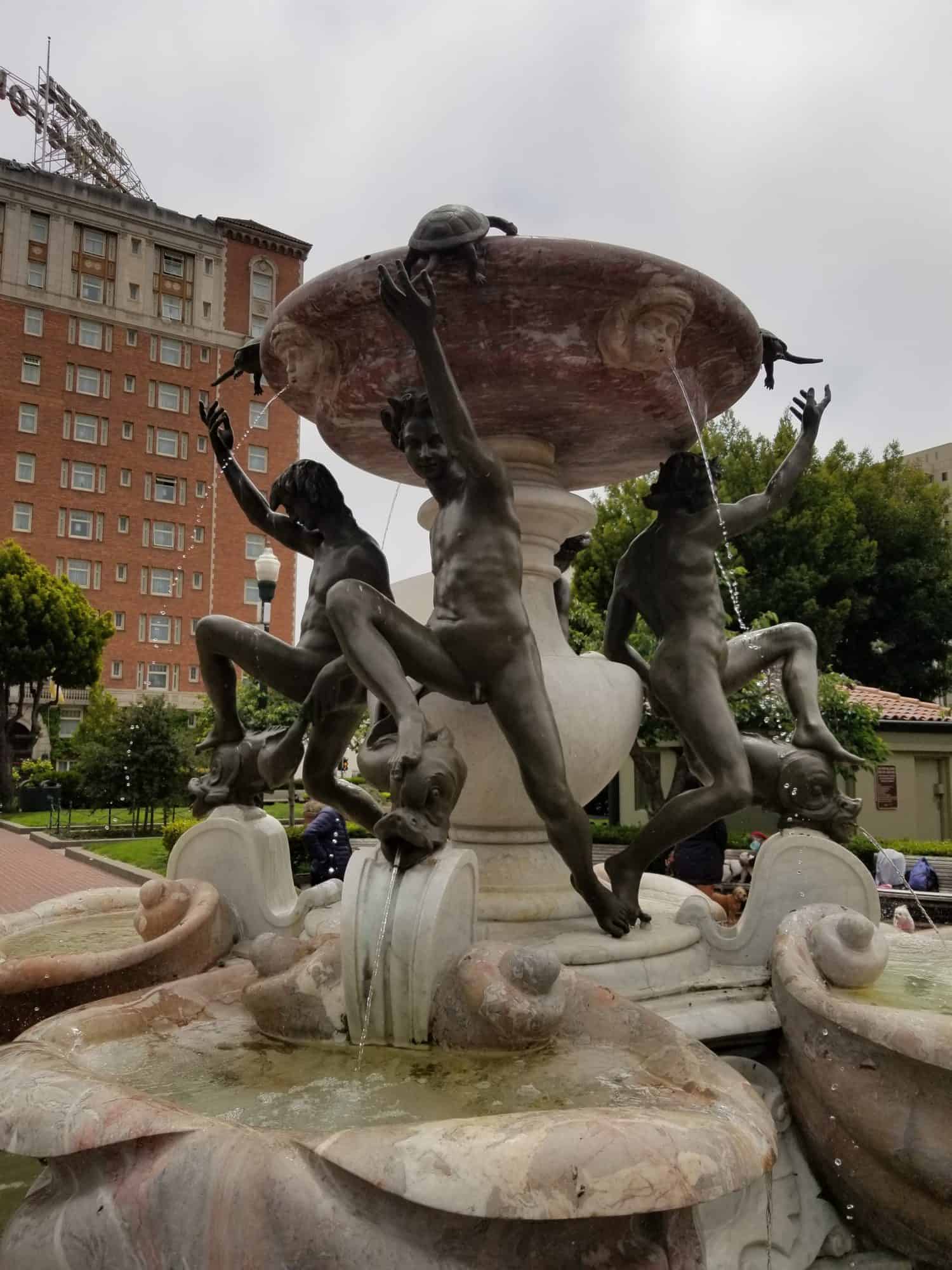 Coppola’s Cafe
Located in the Sentinel Building, a flatiron architectural treasure, Francis Ford Coppola’s Cafe Zoetrope is a design and culinary treasure. A Roman trattoria of sorts, this charming bistro serves up a delightful menu of Italian specialties, many of which are personal family recipes. The breathtaking building also holds a precious place in San Francisco history being the center of bohemian activities, nightclubs, speakeasies and music studios from more than a century. Not to be missed is pizza prepared to the standards of New York’s Luigino’s in 1947, the Caesar salad that was invented in the original incarnation of the restaurant space named “Caesar’s Grill” in 1907, and the mesmerizingly mouthwatering meatballs. 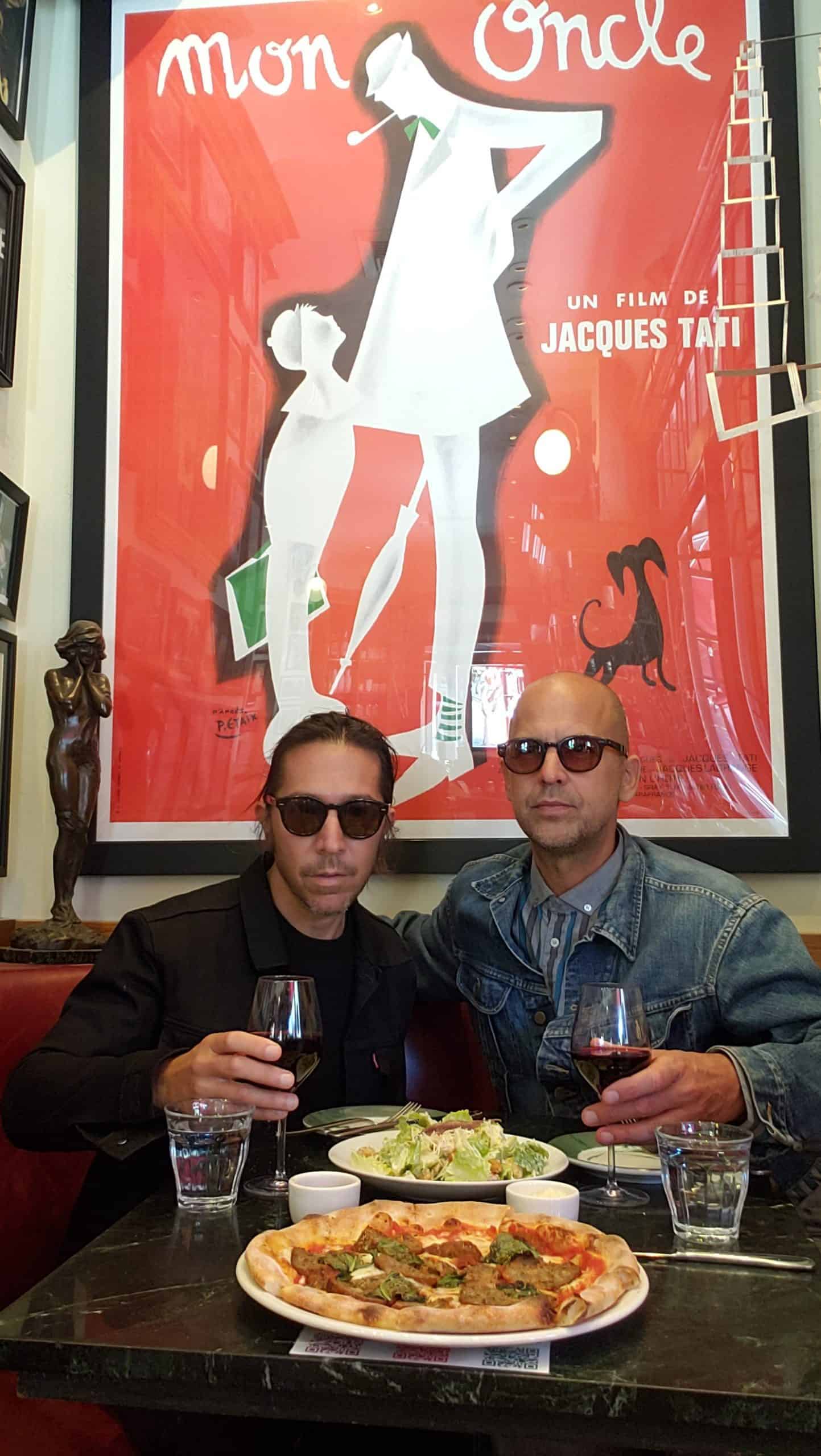 The boys at Cafe Zoetrope

Sandwich Salvation
Founded in 1896, Molinaris’ is a San Francisco Institution. Artisanal salamis, cheeses and breads are abound in this picture perfect Italian delicatessen. The shelves are lined with Neapolitan specialty foods, but the stars of the show are the signature sandwiches individually prepared to order by the spirited employees of this fifth generation family business.

Chow for Now
Mister Jiu’s contemporary Californian approach to Chinese cuisine has been deservingly rewarded with a revered Michelin star. With lotus chandeliers sparkling overhead, the restored historical interior is a compelling backdrop for some of the most dramatic and delicious Cantonese food available in San Francisco. Not to be missed is the Moongate lounge, a must for sophisticated cocktails and the hipsters who love to sip them.

Neighborhood Nibbles
The Gallery Cafe is a great way to pass time amongst locals. This Nob Hill institution is crammed with a dizzying array of tchotchkes, toys, artwork, and vintage records. Bring your computer or notebook and let time fly in this nostalgic local haunt where the Wi-Fi is free and personalities are plentiful.  Don’t miss film noir night every first and third Friday of the month!

Periodical Perfection
The Magazine is one the last bastions for printed ephemera lovers in the country. This impeccably manicured bookshop has been dealing back date fashion magazines, entertainment publications and vintage erotica since 1973. The exquisitely organized private library is truly a San Francisco treat. 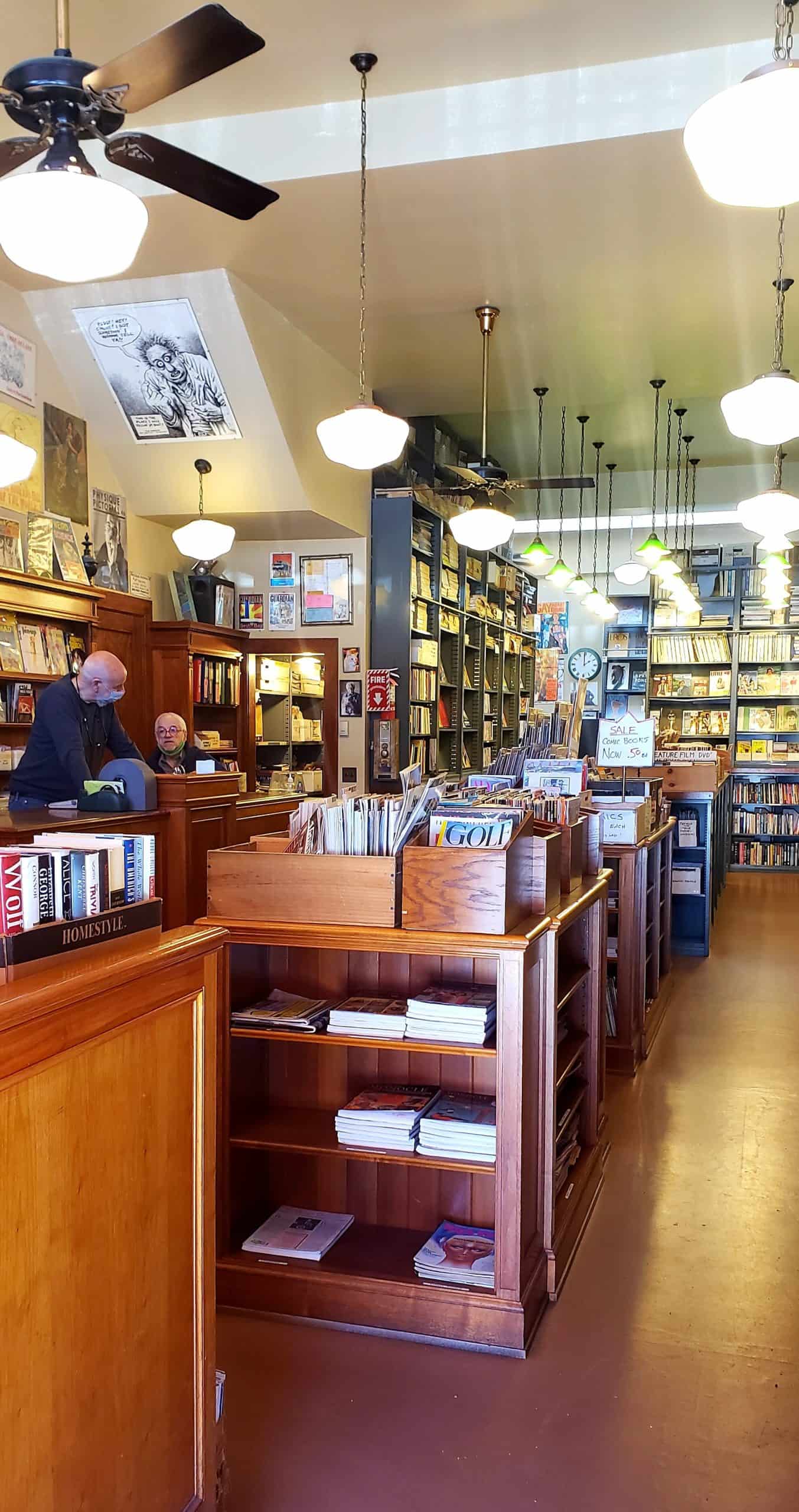