Leslie Odom Jr. on ‘Sopranos’ Prequel Film ‘The Many Saints of Newark’


The Sixties have been good to Leslie Odom Jr. Earlier this year, the Hamilton alum was nominated for two Oscars for his work in the 1964-set One Night in Miami: one for his performance as legendary singer Sam Cooke, the other for co-writing the original song “Speak Now.” And now he has a key role in The Many Saints of Newark, the Sopranos prequel film that kicks off in 1967 Newark, New Jersey.

Odom plays Harold McBrayer, a small-time but ambitious numbers runner who works for the film’s main character, the charismatic gangster Dickie Moltisanti. While Harold starts out a cog in Dickie’s criminal machine, he soon resolves to build his own — and will stop at nothing to make it happen. Where Black characters on The Sopranos were few and far between, and usually presented from the point of view of a member of Tony’s crew, Harold is something new for this fictional universe: a person of color granted his own inner life and agenda separate from what the wiseguys want.

The filmmakers cast a wide net a few years ago to find their Harold. And though Odom had a Best Actor Tony to his name, it was still early in his relatively nascent film career for him to land the part without an audition. Well, without several auditions. The process was shrouded in secrecy, so he was given scenes to record out of context, for a project whose title he didn’t even know.

“They kept saying, ‘Just tape one more time — they’re going to make the decision tomorrow,’” he recalls. “Having been around the business a while, it felt like, ‘Are they looking for a reason not to give me the job?’” Still, he was determined to stick with it. “I was like, ‘I don’t know what the fuck this thing is, but every time I pick up these scenes, I’m inspired.’ The writing was bringing out good work in me. So that’s what drew me. If there was more writing like this behind getting the job, I wanted to walk toward that.”

Earlier this summer, Odom, 40, spoke about Many Saints from waterfront digs in Greece, where he was filming Rian Johnson’s Knives Out sequel — the latest sign that the former Aaron Burr is now a star on a global stage. 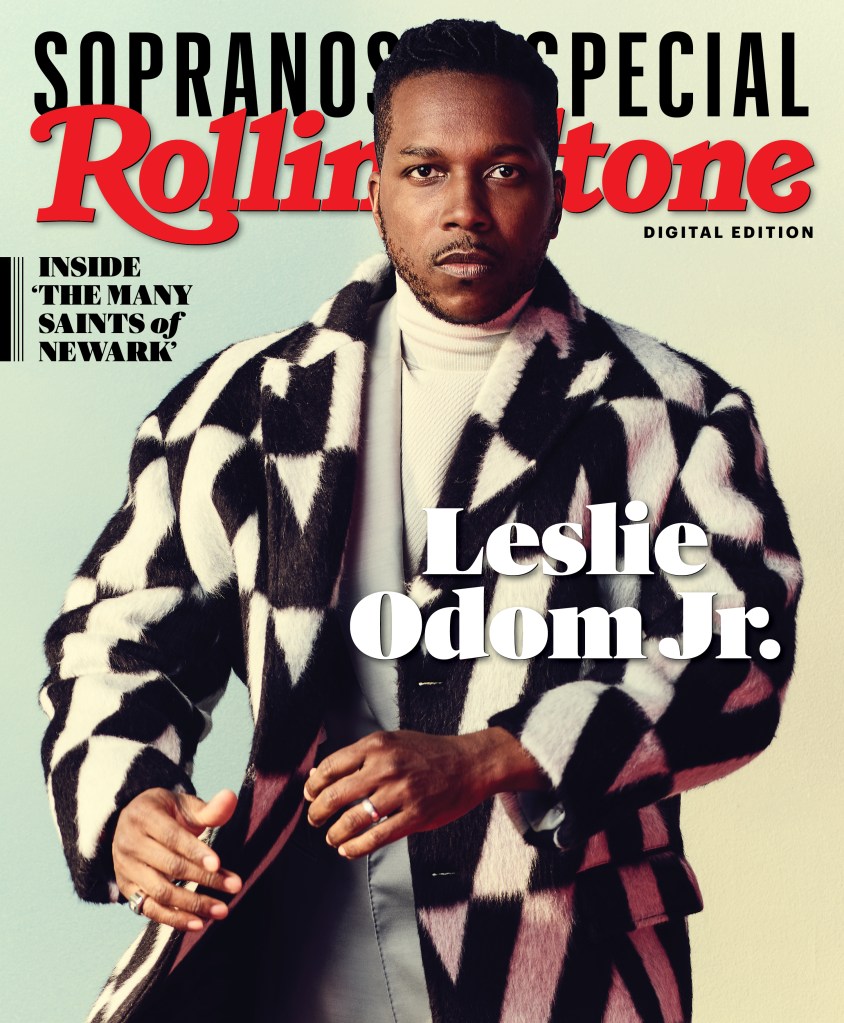 Were you a fan of The Sopranos before landing your role in Many Saints?
Fan, yes. But I hadn’t watched it top to bottom. I didn’t grow up in an HBO house. I couldn’t afford HBO when I first got out of college and stuff. The pandemic was my chance, like so many people, and thank goodness for HBO Max putting their whole library online. God, I love it. So satisfying — like a great novel.

How did the show play for you after you’d done the film and shared scenes with actors playing younger versions of some of those characters?
It was the most satisfying viewing experience I’ve ever had watching a show. Because in its first go-round, people had to wait for the next week. I got to blow through a season in a week and a half and then go to the next season. I got to then go find podcasts, find what was written about that season, do a deep dive. I know the last episode was tough for some people in its original run, but it’s a lot easier all these years later being able to listen to [Sopranos creator and Many Saints writer] David [Chase] talk about that final episode and listen to cast members talk about that.

Did you have favorite characters?
I loved [Tony’s] nephew, Christopher. Love Bobby Bacala. Holy shit, what an actor [Steve Schirripa is]! That guy’s arc — somebody that you completely think is in the margins, and then season, what, four or five, they give them that really tragic, beautiful storyline with his wife. How deep that bench was! Carmela I loved. And holy shit, Annabella Sciorra, what about her?! Comes in and takes over the whole fucking show.

The Sopranos didn’t have many Black characters, and Tony and his crew were depicted as openly racist. Did that ever give you pause watching the show, or did it just feel reflective of the reality of this particular group?
We’ve had years of watching Mob stories malign us in that way. So I’ve learned to look past that, if it’s [about] the truth of the meaning. The thing about art is to show how people are acting in private, to show private moments publicly. While they may be hurtful or lacerating or surprising, that’s the point of it. Anytime Scorsese does it, or David did it, I knew I was in the hands of someone thoughtful, someone who was showing me a truth. It was my choice if I would continue to look at this truth. I knew I could trust the creative; I’ve seen that throughout.

Before the chance to play Harold presented itself, did you know the movie existed?
I’d heard that the film was happening. I wasn’t up for it in the original rounds of auditions. But there came a point where they needed someone quickly, and I got the call. I don’t even know that I knew I was auditioning for the Sopranos [movie]. They keep things very tight to the vest. They’re like the MCU. They don’t send you a script, don’t send you character names, scenarios are changed. You have to make some choices as an actor. You take what you see, and you start inventing. I got a call that they liked the tape that I made, but they had some notes for me. I taped again, then they wanted me to tape again with more notes. And I said, “Guys, I don’t mind taping again, but you’ve got to send me a script. I don’t know what I’m doing.” Then I got on the phone with [director] Alan [Taylor], and he helped clear up all of my questions. 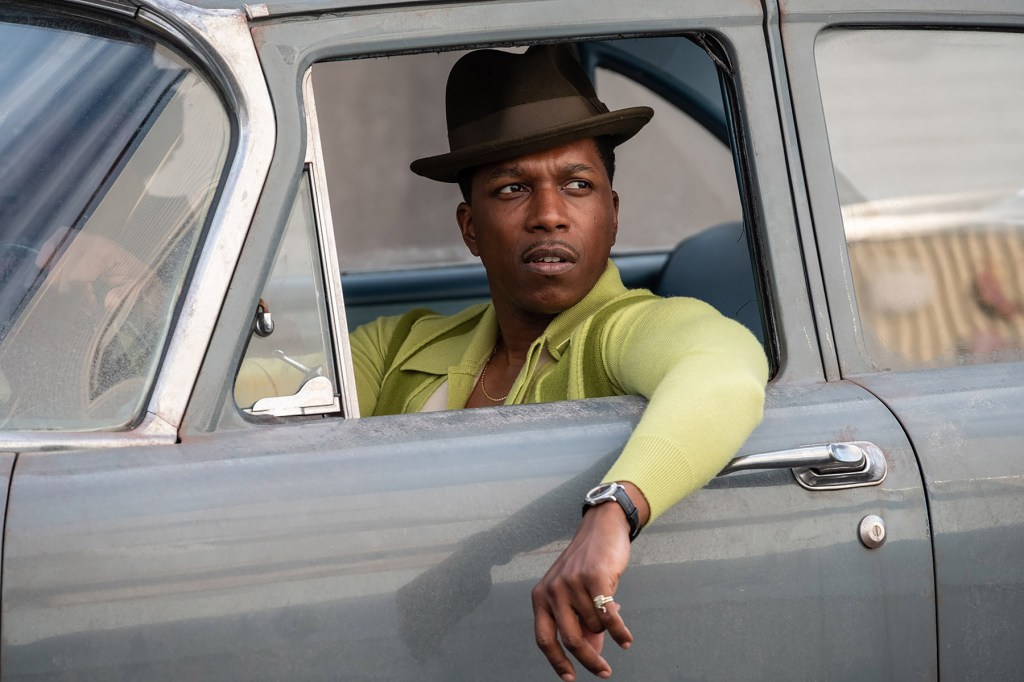 Odom as Harold McBrayer in ‘The Many Saints of Newark.’

So you didn’t know anything at all?
I didn’t know who I was playing. There was this one scene that ended up in the movie, I’m in the bed with my girlfriend and I’m playing it a bit lighthearted, and Alan calls me and says, “I like what you’re doing, but remember, you just killed [someone] a few scenes before.” I said, “Alan, I don’t know any of that. That’s privileged information.”

What did you think of the idea of a Sopranos movie in the first place?
I thought it was dope. It was a way to extend the life of this thing that people love so much. People love an origin story. And I knew if David was involved, it would be OK. To be honest, it sounded like just the kind of movie I’d love to be a part of, but at the time, I was very rarely given the chance to be a part of. I thought, “That’s gonna be way cool for Michael B. Jordan to do,” or some movie star to do. It’s taken me a second to believe in myself in this medium.

When you got the part, did the experience live up to that expectation?
Absolutely. Nobody writes like David. And I think Alan directed his ass off. When we were shooting, he would ask things of me that I didn’t understand — just some technical things — but I trusted him. And when I saw it all come together, I’m just so happy to be a part of it, and so proud.

David was famous for his attention to detail on The Sopranos, and his insistence that things be done in a very specific way to match his vision. Did you experience that here?
A tiny bit, yeah. He’s not a writer who’s interested in you changing his dialogue. He wants it verbatim, word for word. That is only challenging because it’s rare. In theater, we have that. In TV and film, it’s a rarer thing. That presented certain challenges. You can feel corseted at times. But I often find in film, as I learn and grow, that if the actor is tense, the audience doesn’t always know why. Whatever your tension is, it can help make a moment more interesting. So I lean into the discomfort.

David and his co-writer, Lawrence Konner, are both white, and Alan Taylor, the director, is white. You’re the most prominent Black character in it, and in all of The Sopranos. Were there ever times where you had to voice concerns that a moment or a line didn’t feel right to you?
I was with pros. Every now and again, I would have a question, or a different idea. But more often than not, David wasn’t so much interested in my idea as he was in getting me to understand the reason he wrote it the way that he did. So what am I gonna do? I haven’t done enough films to think that I know everything. There was nothing about it that felt shameful or degrading. Outside of that, it was like, “Ah, shit, I’ll do it his way. I’ll be of service.”

Because of Covid, the movie was in the can for all of 2020, while George Floyd was killed and the Black Lives Matter protests were all over the news. As you watched all of that unfold, did you think about how the movie would wind up reflecting this moment?
You always hope that when your art comes, it feels necessary or prescient. But we don’t have any control over that. This year’s been so crazy for so many reasons, I didn’t spend too much time thinking about how the movie was going to meet the moment. But having seen it, I certainly think that it is a piece of historical fiction that feels as relevant as ever.

Did it ever feel surreal to be in a scene with, say, Billy Magnussen or John Magaro, who play Paulie Walnuts and Silvio Dante, having watched a lot of the show already?
For sure. Seeing Billy over that stove [in Satriale’s] was totally surreal. But really cool. I think Michael [Gandolfini] is extraordinary as Tony. Don’t you want five more of these? Just to watch him grow into the character?

You made this shortly before you did One Night in Miami. Very different characters, but roughly the same era. Was there anything helpful about going from one to the other?
This made me a better actor. David and Alan made me a better actor. I got to take that to Regina King’s set, who’s one of the best actors working in our business today, and I left One Night in Miami feeling the same. I just keep trying to go from strength to strength.

Want more Rolling Stone? Sign up for our newsletter.