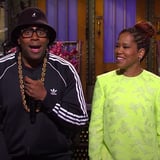 Regina King made her Saturday Night Live debut this weekend, and no one was more excited than Kenan Thompson. As the actress talked about being nervous for her first-time hosting gig, Thompson stood by her side for support. With each new sentence King uttered, Thompson acted as the ultimate hype man as he told the audience to make some noise and shouted out her feature directorial debut for One Night in Miami. “You better recognize! She got nominated for a Golden Glis-obe, baby!” he proclaiming alluding to her recent Golden Globe nomination. There’s certainly nothing like a blown horn and an excited crowd to get you excited for your first SNL episode. Watch King’s full monologue above.

In our Q&A series Last Call, we get down to the bottom of every last thing with some...

Watch Behind Her Eyes Star Eve Hewson on The Tonight Show

Eve Hewson appeared on The Tonight Show Starring Jimmy Fallon on Feb. 25 and had some surprising...

February 27, 2021, No Comments on The Network, Which Isn’t a Green Day Side Project, Perform on ‘Fallon’

The Best Matching Sets at Target

February 27, 2021, No Comments on The Best Matching Sets at Target

February 27, 2021, No Comments on Kandi Burruss Revealed What Ace Wells Tucker Did For Black History Month