Genderless Engagement Rings That Interlock with a Wedding Band


Longtime entertainment exec Tom Leonardis saw something missing in the wedding world and found a way to fix the problem. He’s come up with Gámos, a brand of genderless engagement rings that interlock with a wedding band. Handcrafted in New York, each piece is made to order and still affordable. Leonardis tells The Daily how he came up with the idea and what sets these rings apart.

Tell me a little bit about your background!
I wanted to be a doctor. I was a really smart kid. I grew up in New Jersey and went from middle class to poor, so I couldn’t afford to go to a good school. I went to Montclair State, which is now a university, and floundered for three years because there was no biology department. Then I met these theater students, and one of my friends had these communication books and I thought, ‘Oh, that’s kind of interesting.’ And so I went to the dean and said, ‘I can do this major in a year,’ and he said, ‘No, you can’t,’ but I did. I aced everything.

How did entertainment come knocking?
My friend went on to do an internship at CBS when they only took three interns from the whole Tri-state area. He did the internship and then I got the same internship the next year. I had bought a place on Bleecker Street, and I went from that to [being a] producer for VH1 right out of school. Then I met this guy in Provincetown. We were together for like three weeks, and I decided I was going to give up everything and move to Laguna Beach with him. And I did. We were together for five years. But when I got to Laguna Beach, my boss from VH1 called and she said, ‘I need you to come be a talent coordinator.’ And I said, ‘What’s that?’ And she said, ‘Well, you work with celebrities.’ I wasn’t a kid who was involved in pop culture. I like to read medical books and stuff.  She said, ‘That’s why you’re going to be good at this.’

What was the show?
The Arsenio Hall [talk show} where I was for five years working in talent. I was working on the Paramount lot, and Whoopi [Goldberg’s} assistant Ron [Holder] was like the mayor of the lot. Whoopi was the highest paid actress in Hollywood at the time and she had a bungalow on the lot. I was young and cute and her assistant would say hello to me. When you’re on a show like that,  you’re just on this wheel. And, when I needed a place to get away, I would go and talk to Ron and he became one of my best friends. He’d come down to Laguna Beach and hang with my boyfriend and me. Ron was HIV positive and started to get really, really ill.  He said, ‘You’re the only one that I can recommend for this job.’ And I said, you know, I’ve turned down an assistant job for another performer. Whoopi called me, and said, ‘You know, Ron has no family. If you can just come and help me and help Ron…’ I really, really didn’t want to work for her. But I did and now it’s 25 years later!

How did your role evolve?
She just kept giving me more and more. Then we started to produce together. And then we had Strong Medicine on the air on Lifetime for six years, and we were starting a business. Now, I run everything in the world of Whoopi. I’m producing four movies right now including Sister Act 3.  The universe gets you what you need, right? And maybe I am good at what I do because I don’t care about the celebrity. So, that’s how I kind of got here in some odd way. You know, again, the simple kid. I’ve flown on the Concorde, I’ve met the Queen, I had tea with Harry in Kensington Palace, and been to steak dinners in the White House. I pinch myself. Every day I thank the universe.

Now you are stepping into another world with the creation of Gámos.  How did you come up with this idea?
One of the partners is my friend Woodie Neiss, who is a big entrepreneur. One day I went on Facebook and there was Woodie holding his hand up wearing a wedding band. I called him I said, ‘You f*cking got married and didn’t tell me?’ He said, ‘No, I’m engaged.’ And I said, ‘I don’t get it.’ He said, ‘Well, we don’t either. We didn’t know what to do. So we bought these $25 rings because we wanted something to be a symbol. But now we have so much invested in terms of these rings, right? Because it’s just like, they mean so much that we don’t know what we’re going to do when we get married.’ I said, ‘Woody, I want to create a ring..I want to create a ring that looks kind of like that, but it locks into the wedding ring because I don’t think that men are going to wear two rings. I don’t think that they’re going to wear an engagement ring and a wedding ring. But what if we created this and we locked them together? The engagement ring becomes the wedding band.’ And so he said, ‘Well, you know, I know business. I can do the business part of it.’ And then I asked my cousin, Elisa [Melegari], who is jeweler.  She had made this bracelet for Whoopi. It’s incredible. I went to Elisa and I said, ‘I want to create this ring, and you can do it for me.’  She did it. 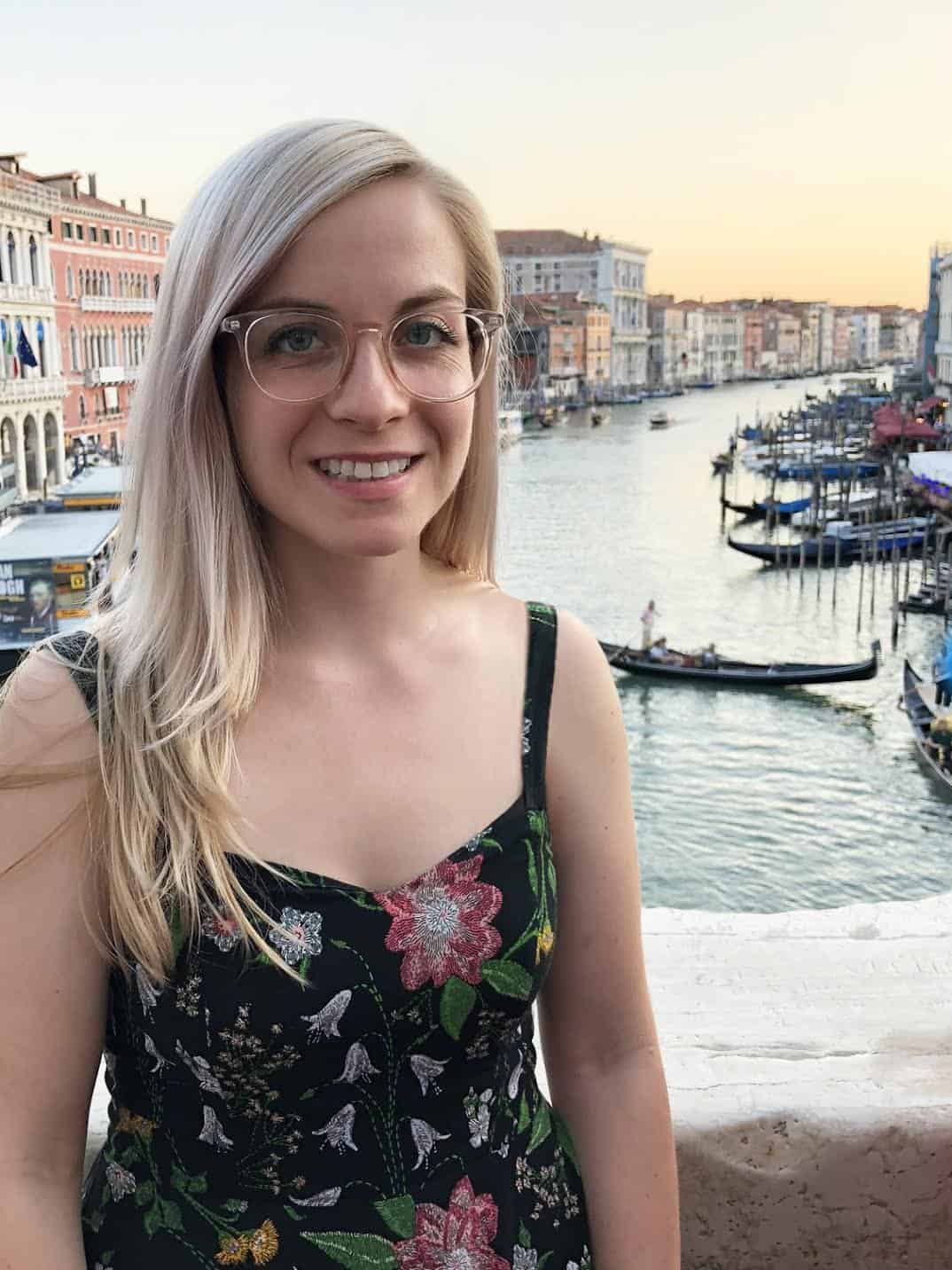 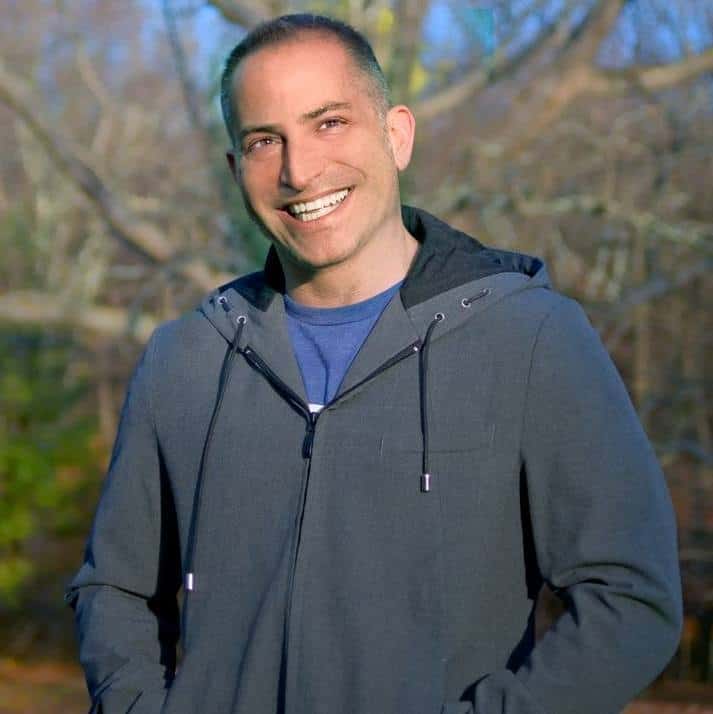 Why is it called Gámos?
It means ‘matrimony’ in Greek, so that was perfect. And Vída means ‘to twist’ in Greek, and Syndéo means ‘to insert.’  Everything is organic to the Greek language. So, the second ring, where you insert the engagement ring into the wedding band, you can, if you want, add black diamonds. Why should women only [wear them]? Why should women only show their commitment at the time of an engagement? Why isn’t everybody wearing an engagement ring? Men should have engagement rings! And the fact that they marry to the wedding band, so then it becomes one, solves the problem. This is your design. If you want rose gold, or you want some kind of [engraving], we’re making it to [fit] you. They’re custom because it’s your future, it’s your love, it’s your journey.

How can people get them?
They’re all handcrafted. If you wanted one and you’re in New York, we would come to you. But if you’re sitting in Omaha, we send you [it]. You can’t go into a jeweler and be sized because of the technology of it. We send you a kit and then you size it to your finger—or your boyfriend’s or your girlfriend’s or whoever you’re marrying. And then we custom build it for you. The Syndéo is different because you can go into the jeweler and find out the size. But we want this to be personal. We want to connect with you. 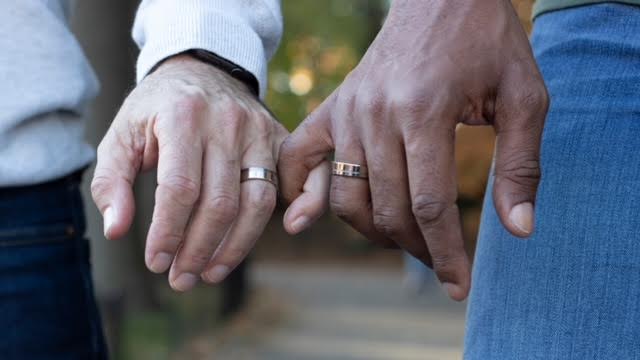 How much are the rings?
They start at $1,400. and remember you’re getting two rings. You’re getting an engagement ring and a wedding band. But the lowest price is around $1,400 and then they can go up if you want diamonds. But we’re certainly not $15,000—we’re not even close. You can get all the bells and whistles for a few thousand dollars. 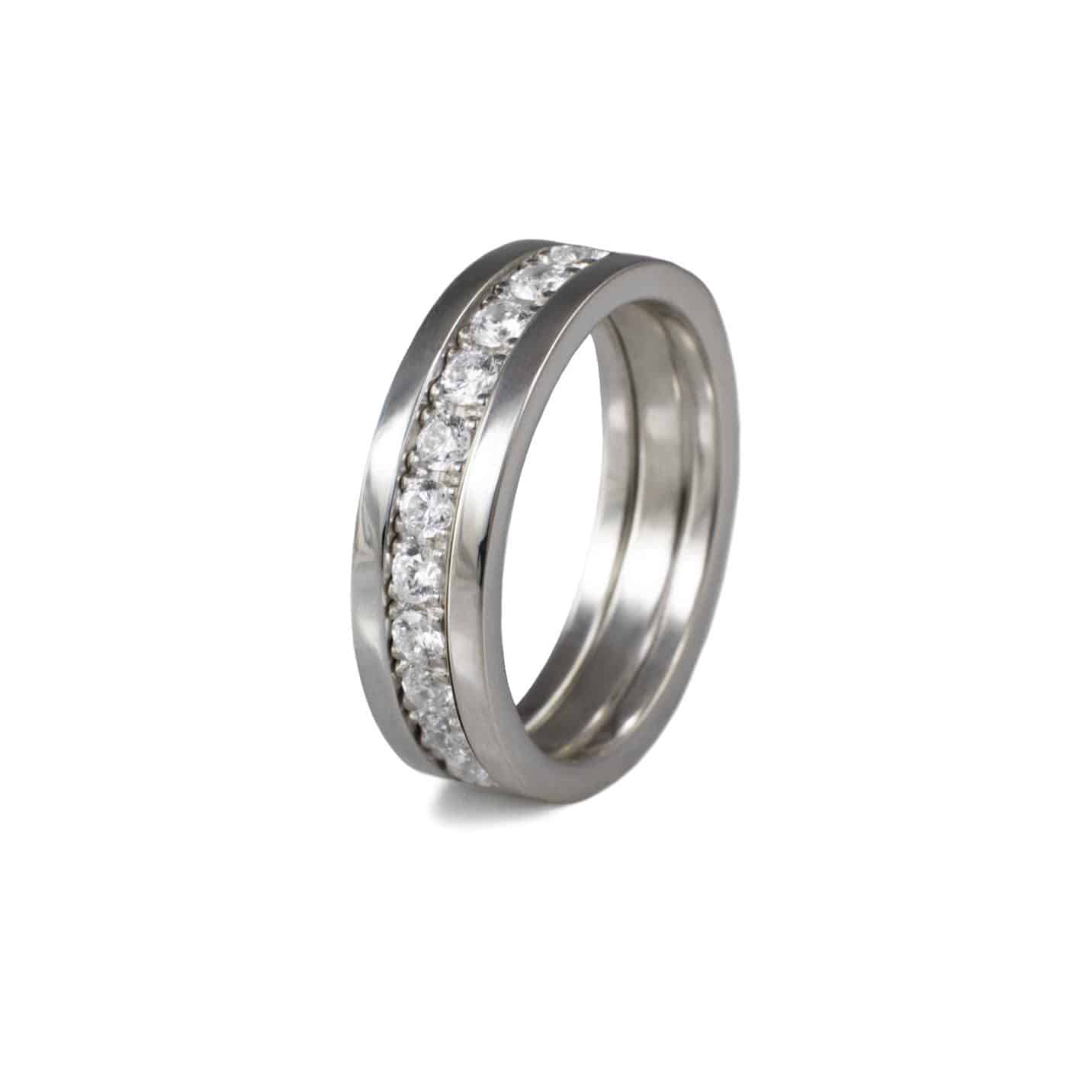 What’s been the most surprising thing in this process for you so far?
I’m not surprised that we’ve gotten a lot of great feedback. The most surprising thing to me is trying to do the build . I’m used to quick. I know how to build something. I know publicity. I can move that mountain and I know how the publicity wheel moves. I’m learning how to do this with something that doesn’t exist. I don’t want to say I have a good idea, but I think everybody thinks they have a beautiful baby.