From The Archives! The Most Scandalous ‘True Life’ Accounts From The Hamptons


Over the past decade, you couldn’t get enough of the anonymous Hamptonites we’ve featured in our long-running True Life column about East Enders behaving badly and the poor souls who have lived to tell. We’ve gone deep with personal trainers, desperate housewives, self-confessed bad boys, reaaaaally rich people, and perhaps most famously, a Hamptons 11-year-old, who raised many an eyebrow with his unorthodox upbringing. The Daily Summer walks down memory lane with a few highlights from these unforgettable interviews.

Is it hard to parent with a massive hangover?
No! We’re sitting on the beach with our kids relaxing the next day and watching them run around. We manage just fine.

What happens at parties?
The good news is that it’s not like the ’70, when people switched spouses and there was all that lying and cheating. I don’t think that really happens as much. It’s all about having a good time. The girls want to hang out with the girls, and the guys want to hang out with the guys. At dinner parties where the table used to be man/woman seating, it’s now girls on one end and guys on the other. There’s a lot of rosé-drinking and post-dinner smoking. The new thing is Molly, which is something that you put on your tongue. I don’t even know what’s in it. Something with Ecstasy, I think. I keep hearing the word Molly everywhere. 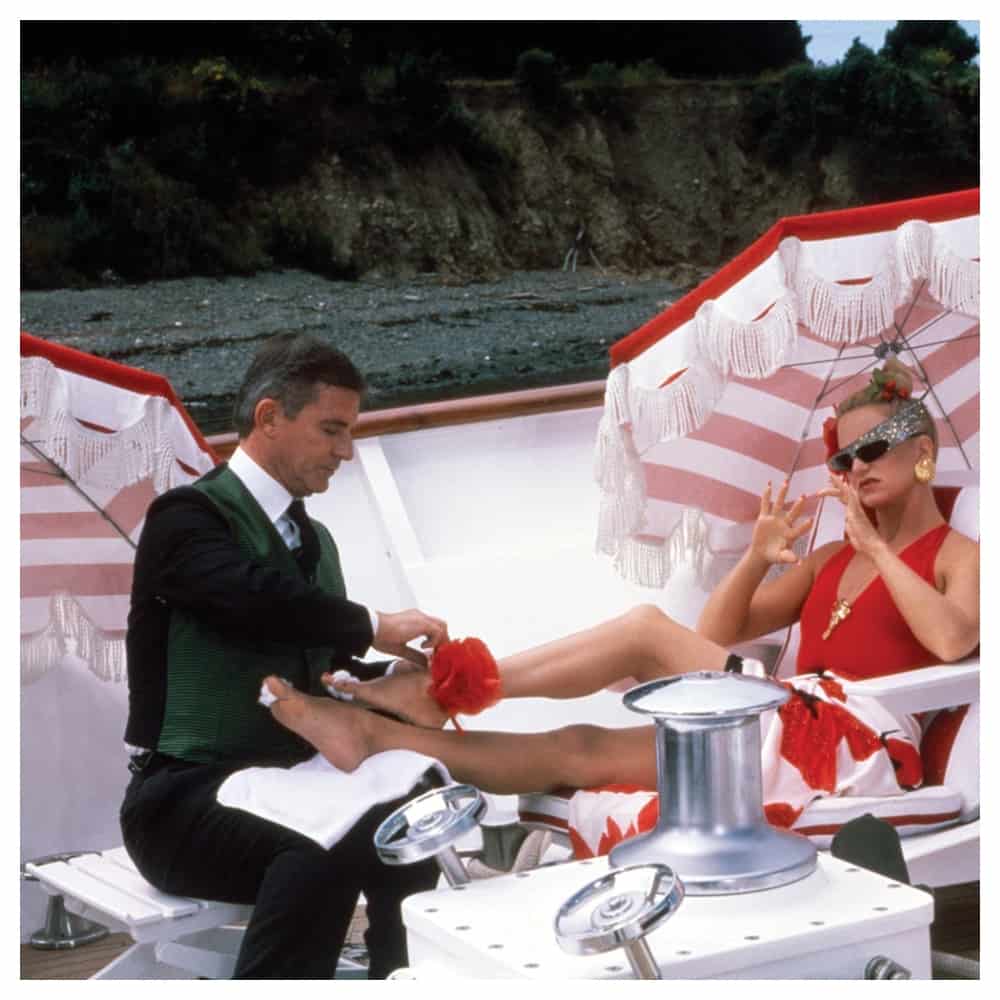 How many of your friends have nannies?
I don’t know anybody who doesn’t have a nanny.

How much plastic surgery is going on in your circle?
I would say about 90 percent of the women I know get work done. If you want to add in Botox, we can bring that number to 100 percent. Good for them. I have a friend who looks so much better since she’s done things to herself. Then there’s the ones who will overdo it, and you’re like, “Whoa!” In this day and age, if you have a bad nose or you don’t like your breasts and you can improve it, what’s the downside?

What’s the hot trend within your group?
There’s a whole new thing with liposuction that you can do where you can suck out fat from your arms. Everybody’s talking about that. It freaks me out. The other thing is fillers, like when you put needles in your face to plump it up. Another hot trend is eyelash extensions.

What are the different levels of wealth?
Someone who has a butler is a big deal. Butlers are back! Everyone wants one.

Does everyone you know have a nanny?
They do. Some of my friends have a manny, but that’s not for me. That’s more for the sporty kids. I’m not into that.

How long do you get to keep your nanny for?
My mom has promised me that my nanny will be with me until I go to college. I’m not sure what happens to her then, but we don’t really talk about it. She started when I was 2. I had a few before her.

What are the responsibilities of your nanny?
When she picks me up, she has to bring my phone. Every day she has to charge my phone to 99 percent; I don’t want to overcharge it. She stays with me when my mom is away. I’m a little bit demanding and picky. I’m specific about my food. If the cherry has something in it, like a seed, I don’t want it. I like everything in order. My nanny is also the only person who can touch my gadgets, because she cleans up my room. She also organizes my colognes and combs.

Will you have a nanny for your kids?
One for each. I had to share.

What’s your hobby?
I don’t really do kid activities. I’m interested in technology and computers. I enjoy going to polo with my dad. I consider myself a kidult.

What’s that?
A kid who acts like an adult.

What’s your allowance?
It’s $350 a month, but if I run out, I’ve memorized my mom’s credit-card number so I’m covered.

What’s your allowance?
It’s $350 a month, but if I run out, I’ve memorized my mom’s credit-card number so I’m covered. 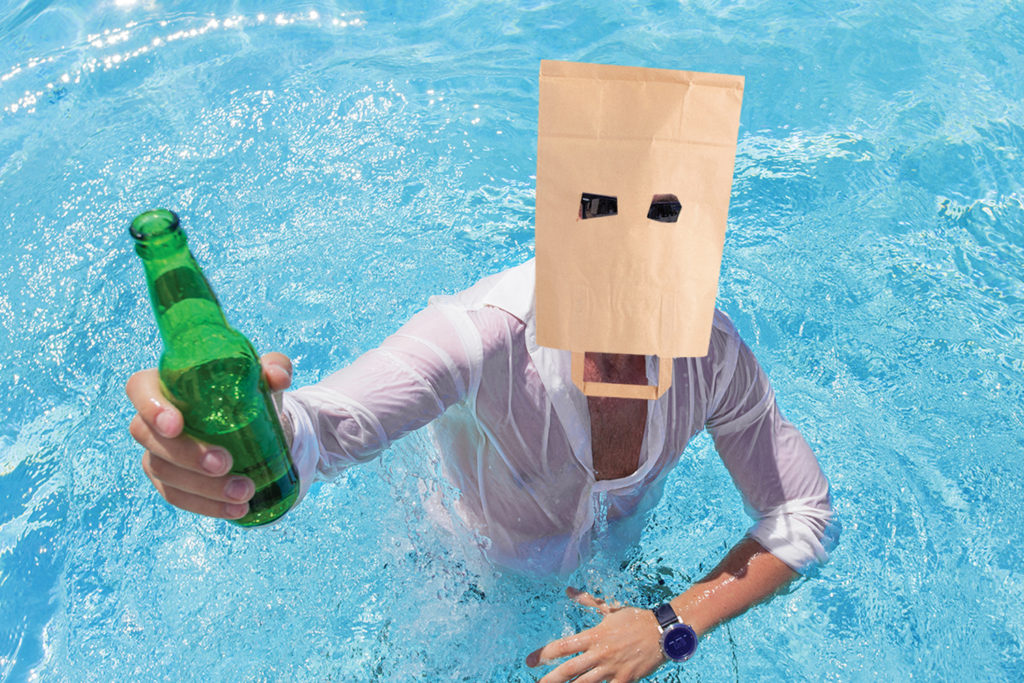 How’s your summer?
It’s been an adventure, for sure. I’ve been out in the Hamptons every weekend, but I’m not getting hotel rooms on purpose, because I go home with a different girl each night. It’s led to some pretty interesting scenarios—everything from waking up on the beach to waking up in a mansion. I’ve even been kicked out of a few houses. I could afford a share, but it’s more fun to go out without knowing where I’m going to end up.

Why is that so appealing?
Something’s wrong with me? I don’t know, but it’s freeing to submit to this lifestyle. There’s no security, and I find that exhilarating.

Would you call yourself a hustler?
I don’t like the negative connotation that comes with that word, but I’m certainly working for a bed every night.

Would you call yourself promiscuous?
I’m probably the definition of the word.

“I’m a Hamptons Personal Trainer” 2015
Do the sessions ever go unused?
All the time! I sometimes show up at people’s homes for sessions and have to go through butlers and housekeepers. I’ll wait for 30 minutes and some lady will come and say, “I’m sorry, but she isn’t able to meet today.” The only time I’ve ever fired clients is in the Hamptons.

Because they were rude?
Yeah. They act like the world revolves around them and their problems are bigger than anybody else’s. Even if they’re late, which costs me money, they expect service with a smile. Some were also just crazy, but that happens in the city, too. I had one woman who asked me if I would call her “Mommy.”

What’s the most frustrating part of your job?
Getting hit on is actually the easiest part. In the Hamptons, there’s a big temptation with food for my clients. They’re all on vacation, and drinking and eating more than they usually would. Clients put on weight they don’t really have to, and have to work extra hard to lose it. Then again, that does keep me in business. 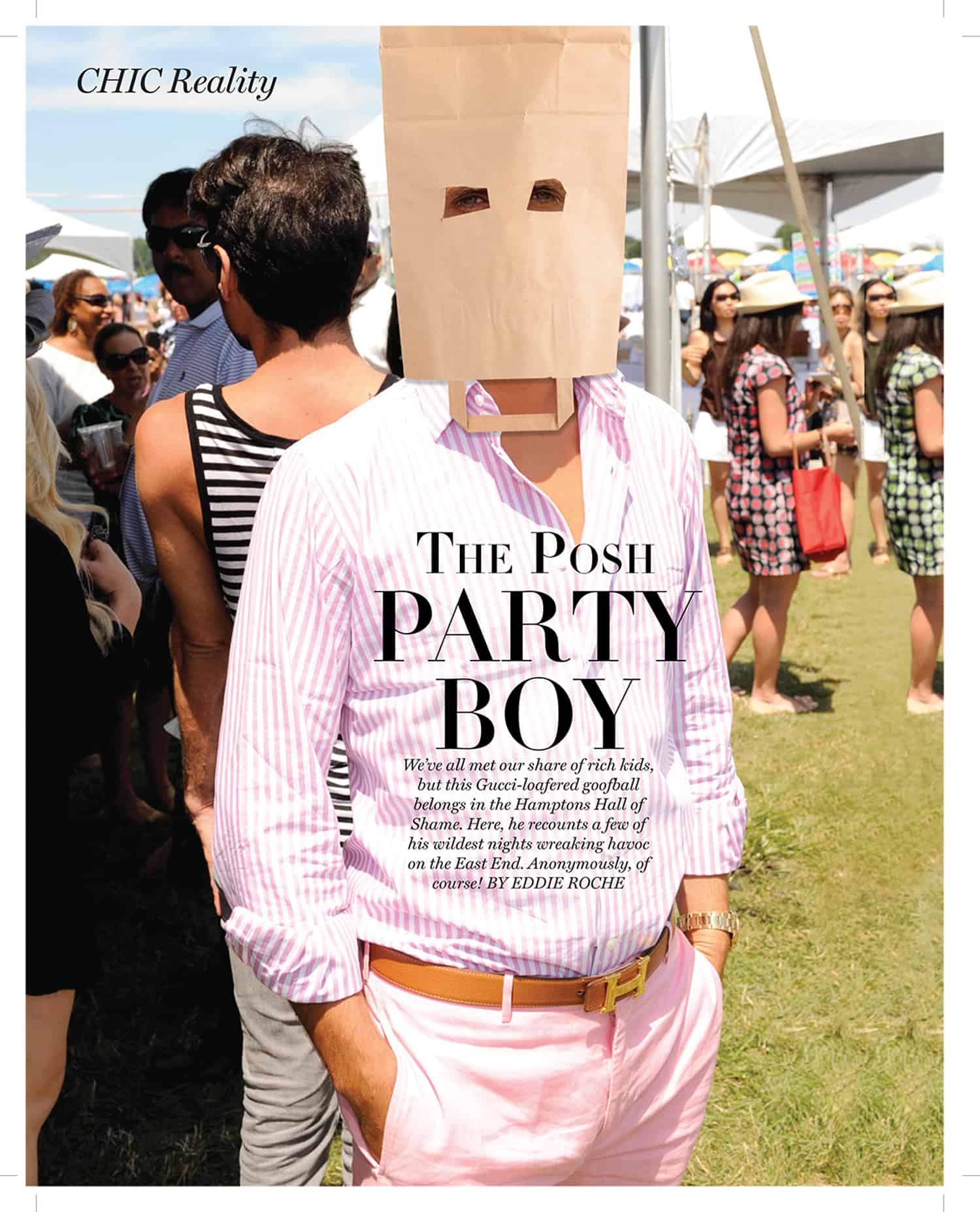 Let’s get right to it. Craziest night in the Hamptons?
Okay, once we were staying at my friend’s house, which is so big you can’t even see to the end of the property. My friend’s mom makes this famous ice tea and we decided to mix it with cases of vodka. Three days later, we were out of our minds.

Three days later?
We never stopped drinking. One night we were dancing on the furniture and this other guy and I fell through the glass of the poolhouse door. We got destroyed. We didn’t know what to do, so we grabbed a car and booked it to the [Redacted] hospital.

Go on…
So we got to the hospital and asked them to help us. It turned out he had to have major stitches. We were killing time in the waiting room and thought we’d have some fun. One guy put on a girl’s high heels, and we were all trying on each other’s clothes. We went to a supply room and stole gowns and put them on. We started playing doctor. Next thing we know about six security guards came to escort us out.

The biggest misconception about being wealthy?
That we’re spoiled-rotten assholes—rude, entitled, self-serving, inconsiderate, and disrespectful. It’s completely the opposite! There’s a greater emphasis among us on cordiality, etiquette, social grace, and compassion. We learn it when we’re young. Our parents actually had time to instill values. Now, it’s our duty to lead by example.

So we understand you a little better… Where do you fit in on the scale between Sir Ivan rich and Ron Perelman rich?
I’m probably in the financial bracket closest to André Balazs. For the record, I have more hair than Ron.

What’s a typical day like for you?
No single day is alike. I’m open to whatever. You want to go to the Bahamas tomorrow? Let’s go! You want to go to Monaco for dinner? Let’s do it! I’m up for the adventure. I wake up late because I don’t have anything to do in the morning, and I like the night. I wake up at noon, have sex, return a few phone calls, check my e-mail, pick up my child from school, and then, there are always activities. When my kid is in bed, I have a cocktail and sit in the hot tub. Then my friends come over, and we plan something. And then sex, rinse, and repeat. 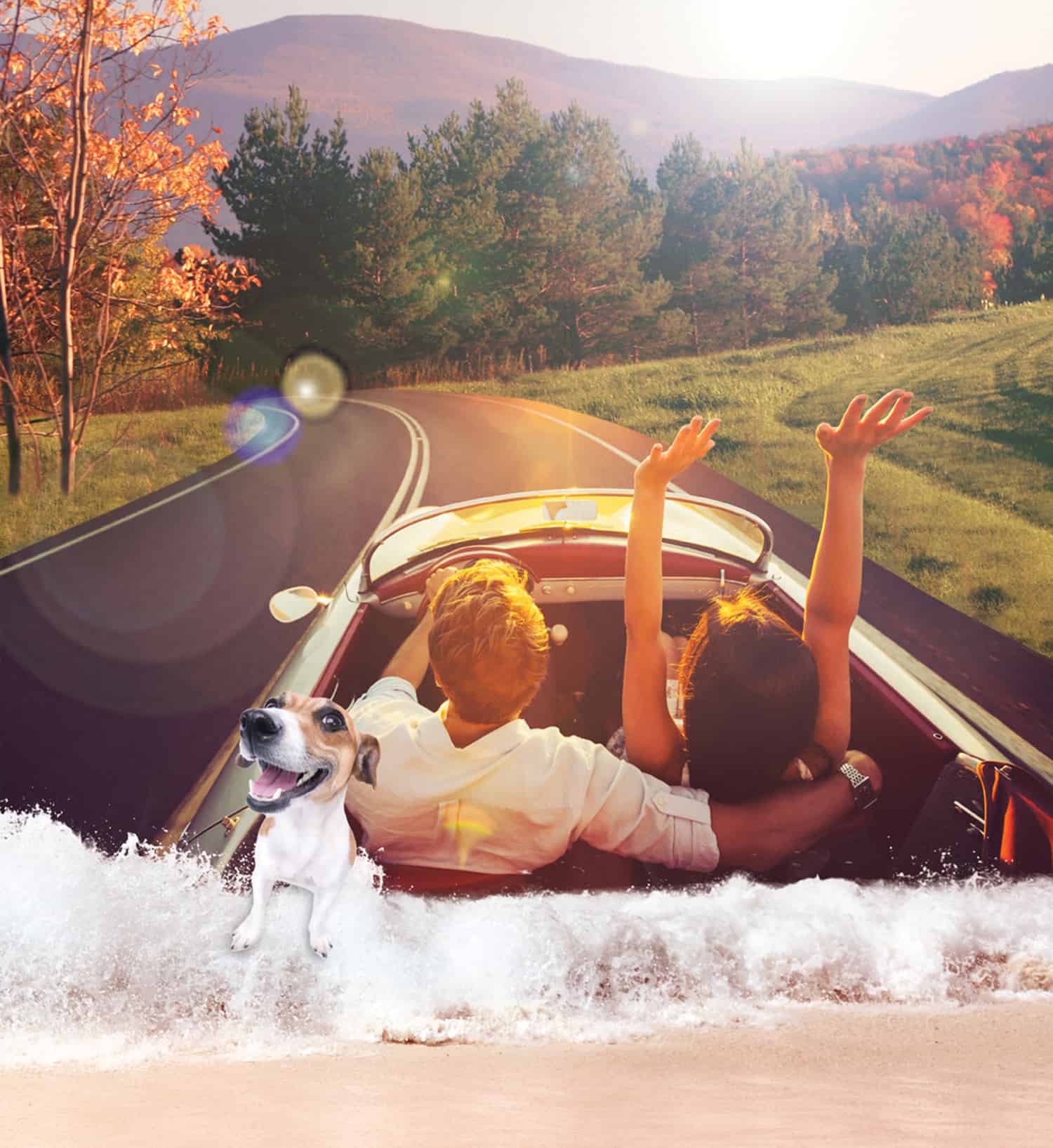 How good in bed are the wealthiest Americans?
Money only buys inches in real estate. I’m justkidding! I can only speak for myself, but I can make people change religions after one night with me.[Laughs] Okay…maybe we are assholes, but in a fun way.

What were some pain points?
The effort of having to get to the Hamptons. From the moment you turn onto Montauk Highway, it’s an infuriating nightmare. Another alternative is a train on the LIRR, where you are not guaranteed a seat and risk having to sit in the dirty aisle next to 20-year old PR assistants. No thanks! The compromises that people make! I don’t want to be exploited anymore. I also hated that nothing in the Hamptons is spontaneous. To me, the definition of a vacation is not planning anything. Otherwise, I might as well stay home.

Did the Hamptons make you feel poor?
Not really. More exploited and used. I’m a big believer in free market and enterprise, but I don’t want to pay $58 for a lobster roll. The prices are astounding, and that’s what everybody accepts and expects. Also, I have no idea how people have $22 million extra laying around for a vacation home.

Dazzle Your Fall Wardrobe With These Made In Italy Accessory Brands!

Dazzle Your Fall Wardrobe With These Made In Italy Accessory Brands!

September 18, 2021, No Comments on Dazzle Your Fall Wardrobe With These Made In Italy Accessory Brands!