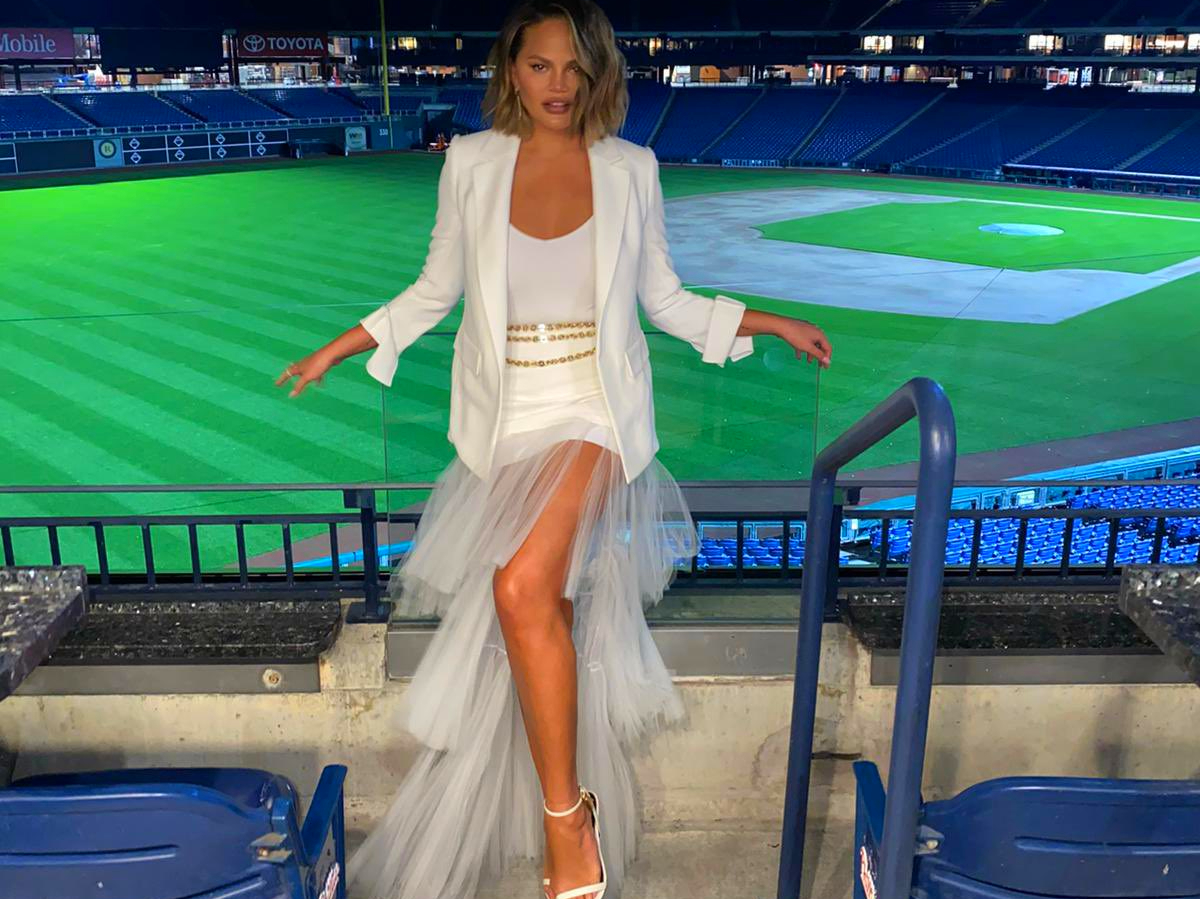 Chrissy Teigen and her husband John Legend have been extremely vocal the past four years about their disdain for President Trump. To say the couple is elated that Joe Biden is the President-elect is an understatement, to say the least. The couple has been celebrating in West Hollywood with thousands who are cheering the election results and Chrissy has never looked better. The model is now sharing photos that she took at the Kamala Harris event that was held in Philadelphia. She shared four photos from the event on her official Twitter account and fans couldn’t help but notice the incredibly stylish outfit she wore.

Chrissy made it clear she had held on to the photos because she didn’t want to make the campaign event “about her” or take the focus off of the election. Now that victory has been won, Chrissy is sharing her stylish look.

Chrissy wore Georges Chakra’s Tulle Tiered skirt and paired it with a blazer from Chloé. Chrissy wore what appeared to be a long white tank with the outfit, though it may have been a bodysuit. She draped a gold belt around her waist for an even more stunning look.

John Legend performed at the event that took place at Philadelphia’s Citizens Bank Park. John brought his family on stage and even Luna and Miles put on a fashionable display.

Here is a video where you can clearly see Chrissy Teigen‘s gorgeous outfit.

You may see John Legend performing “We Will Never Break” below.

In one of the photos that Chrissy Teigen shared on Twitter, she was laughing whole-heartedly while leaning against her husband who stood and looked directly at the camera.

Chrissy shared a solo photo where she showed off her leg due to the skirt’s high slit and in another photo, the couple’s children Miles and Luna could be seen.

You may see Chrissy Teigen’s fashionable look below.

These are all from the Kamala event in Philly but I didn’t wanna post and make it about me…but we pretty much won so here’s me! pic.twitter.com/9z7CFSHkhf

What do you think about Chrissy’s outfit? Do you like the Georges Chakra tulle skirt?

The singer raves about his wife, Hailey Baldwin any chance he gets, so of course, on her...

Just last week, the influencer was involved in a huge controversy but now, the TikTok star...

Apparently, John Cleese has managed to make a lot of people mad on the internet. The comedy...

RS Charts: Billie Eilish’s ‘Therefore I Am’ Debuts at Number One

November 23, 2020, No Comments on RS Charts: Billie Eilish’s ‘Therefore I Am’ Debuts at Number One