‘Candyman’ Star Yahya Abdul-Mateen on His Rapid Rise in Hollywood


This story originally ran in the July 2020 issue of Rolling Stone.

Yahya Abdul-Mateen II walks into a downtown Oakland diner carrying a half-dozen shoeboxes stacked to his chin and makes his way — carefully — to a booth. He’s barely gotten settled when a fortysomething dude at the next table calls over to him: “Excuse me, I hate to bother you …” You can see Abdul-Mateen tense up ever so slightly, as if waiting to see whether this guy is a fan of HBO’s Watchmen (on which Abdul-Mateen played Dr. Manhattan), or maybe Aquaman (Black Manta), or Us (Lupita Nyong’o’s flashback dad), and whether he wants a selfie, or an autograph, or — “Are you a shoe guy?” the man finishes. “I’m looking for a shoe person.” Abdul-Mateen grins and shakes his head politely. “Nah,” he says, “I’m not.”

It’s a sleepy morning in late February — mere weeks before businesses like this will shut down amid the pandemic — and although Abdul-Mateen is a burgeoning movie star, he’s not yet at the stage of fame where random dudes at diners who need gray-market sneaker dealers recognize him. He is famous enough that shoe brands do send him free sneakers he has no use for — and he’s got a few likely blockbusters in the pipeline that stand to catapult him squarely into stardom. For one: He’s been busy shooting some wild action scenes across the bay in San Francisco for his co-starring role in The Matrix 4. “We did some shit last week,” Abdul-Mateen, 33, recalls. He can’t say much, but his enthusiasm is palpable. “I was on this roof with helicopters — man, it was crazy.” He grins like the 13-year-old kid he was when the first Matrix came out. “Like, it’s The Matrix 4! You sign up for The Matrix and you step into it and think, ‘OK, it’s The Matrix,’ but then you’re at the table-read and you hear Keanu Reeves say something, and it’s like, ‘Oh, shit. I’m in The Matrix.’ And then you get to work and some Matrix-type shit happens, and it’s like, ‘Oh, shit! I’m really in The Matrix!’ ”

In mid-March, production on that movie will halt. But Abdul-Mateen has another star turn already in the can and due out, after numerous pandemic-related delays, on August 27th, 2021: the Jordan Peele-produced, Nia DaCosta-directed reboot of the 1992 horror classic Candyman, in which a black, hook-handed ghoul terrorizes a Chicago housing project and the academic studying it. “I think it’s going to be scary as fuck,” Abdul-Mateen says. “It’s not a remake. It picks up 30 years after the original story, set in present-day Chicago. We tell it in the context of what’s going on today — issues like gentrification, the housing crisis, the disenfranchised.”

Of course, these problems don’t exist merely in Chicago — they’re prevalent in Oakland too, which Abdul-Mateen knows firsthand. Born in New Orleans, he moved with his family to Oakland as a kid. “My mom was a homemaker, and my father paid the bills as a construction worker, but he loved working on cars,” he says. The senior Abdul-Mateen could be eccentric: “He’d have oil stains all on the walls and all over the bathroom. We’d make him a sandwich while he was working, and sometimes he wouldn’t even come out from under the car — he’d just reach out his hand, covered with grease stains, and eat it.” He chuckles. “ ‘How you got oil stains on your sandwich, Daddy?’ ” 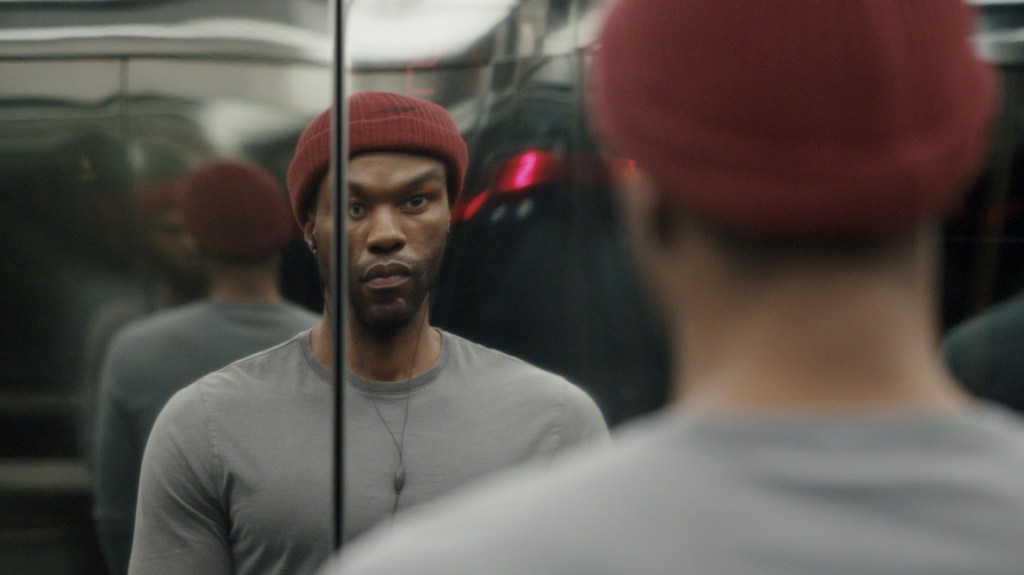 In high school, acting was nowhere on his mind, and he characterizes himself as anything but a student of cinema: “I’m catching up now. I only saw The Godfather for the first time two years ago. A security guard on a shoot told me to watch it.” (He was especially struck by John Cazale’s performance as the tragic Fredo.) “I didn’t grow up watching movies,” he says. “I’m the youngest of six, so we kind of played and entertained each other. I was an outside kid, that’s what I did.”

In his adolescence, that translated to sports. He ran track in high school against Marshawn Lynch, the star NFL running back, and recalls Mistah F.A.B., the beloved Bay Area rapper, beating him in the 100-meter dash. “I graduated with a real West Oakland identity: long dreadlocks, goatee, the whole nine,” he says. “It was just part of my attitude.” But around 2012, “we got priced out.” His family settled in Stockton, in California’s Central Valley. “The only thing that’s still [in Oakland] is my high school,” he says. “My best friends have moved out. It’s crazy.” (His father died of cancer in 2007.)

Abdul-Mateen’s path to Hollywood was circuitous. As a student at the University of California, Berkeley, he got a degree in architecture. Along the way he ran track and “took an intro-to-acting class and a Shakespeare scene-study class, too,” he says. “That was basically just on a dare from a teammate: We did some team-building skits and I was making everybody laugh, and he said, ‘Dude, take a theater class.’ I did, and I had a ball.” Architecture work was scarce upon graduation, so he took a job in the San Francisco city planner’s office. It was only after getting laid off that he decided to give acting a shot. “I said, ‘I’m going to give myself three years.’ ” This plan sent him zigzagging around the East Bay, trying to hone his skills. “Every day I went to the library and read a different play,” he says. “I’d practice monologues at the gazebo at Lake Merritt. I read August Wilson, Tennessee Williams, a lot of horrible stuff, too. I’d spend hours in my living room talking to myself, running lines, then driving to a community theater in Lafayette to say two lines in a play.”

His hard work was met with rapid results. In 2012 he got into the prestigious Yale MFA acting program, and upon graduation was cast in Baz Luhrmann’s Netflix series The Get Down. “I haven’t had an apartment since,” he says, explaining that he started living out of hotels and rentals, moving from gig to gig in a blessedly unbroken chain.

Whether in Watchmen, a (very weird) show that explored themes of white supremacy, imperialism, and historical trauma, or a more straight-ahead comic-book movie like Aquaman, Abdul-Mateen approaches his roles with all manner of high-level, Yale-bred technique, including a regular routine of “crawling on all fours in my living room, reading lines, putting [a script] into my body.” I ask him to elaborate. “Well,” he says, “the alternative is to sit down on the couch and read my lines, and I don’t want my body to memorize that. When I say these words, I want it to be muscular.”

We finish breakfast and walk north, into Oakland’s Uptown, with Abdul-Mateen calling out landmarks as we go. (I carry a couple of his shoeboxes for him.) “That’s Marshawn’s shop,” he says, pointing at the Beast Mode store. The gates are shuttered, so he pulls out his phone to call someone he knows who works there. “I got these shoes, but I’m about to leave town,” he explains. “I thought maybe they could give ’em out to some kids or some homeless people.” No dice. We keep walking. “I’ve been saying that after The Matrix I’m gonna shut it down for a couple months, go and get a place,” he muses. Come May, with The Matrix on ice, he’ll wind up in L.A. — renting “a little house with a yard,” as he puts it, when I check in with him in June, where he passes time watching movies, going for walks, and “catching up with family and friends over Zoom.”

Before all of that, though, back in Oakland, at the corner of 17th Street and Broadway, Abdul-Mateen stops. “This is where I was when I got my callback to Yale.” He pauses for a moment, looking left and right, remembering that moment. Then he gets on his phone and calls some more people he knows who are still in town — he needs someone to take these shoes.

Janet Jackson is something of a paradox. She’s one of the biggest pop stars on the planet—and...

Kristen Stewart’s Princess Diana struggles to conform to the Royal Family’s way of...